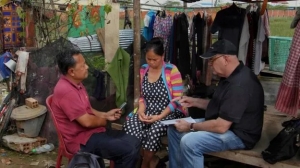 Unlike in Ukraine, surrogacy in Cambodia was unregulated. Surrogates in Cambodia were poorlyselected and ill-prepared. This is the exact opposite of Ukraine, where the law has strict legal rules and regulations regarding surrogacy and surrogate screening. At Delivering Dreams, only 1 of 12 applicants are considered for surrogacy. We support and care for our surrogates with psychological, nutritional and general support before and throughout the pregnancy.

With this ban, Ukraine is one of the few low cost options for surrogacy.

Find out more about the surrogacy ban in Cambodia:

Commercial surrogacy in Cambodia will be permanently and completely banned if a long-awaited draft law is approved, according to an official on Tuesday at the Women’s Affairs Ministry, which began drafting the legislation nearly a year ago.

“The main content of the law is that we absolutely ban commercial surrogacy, and any actions that get benefit or profit from surrogacy are completely banned,” ministry spokesman Phon Puthborey said on Tuesday.

The government clamped down on the then-burgeoning and unregulated industry suddenly in October, announcing an emergency ban on the practice following similar bans in neighboring countries.

Stephen Page, an Australian lawyer who specializes in surrogacy, said the ban had “long been predicted.”

“The ban was entirely inevitable because of the failure of the government to properly regulate surrogacy in the first place,” he said in an email. “If the government had not allowed the Wild West to operate, we wouldn’t be discussing this now.”

Caught up in the crackdown was Australian surrogacy broker Tammy Davis-Charles and her two Cambodian colleagues, who were sentenced to 18 months in prison earlier this month. No other criminal cases were pursued, despite Ms. Davis-Charles’ testimonies implicating others in the trade.

Dozens of foreign intended parents were left in legal limbo when the temporary ban was announced, unable to take their children born to Cambodian surrogates out of the country. At least seven babies born to surrogates remain in the country. Their parents are currently going through a formal legal process to take their children home under new guidelines announced by the government last month.

Mr. Puthborey said on Tuesday that the draft law had been sent to several related ministries and departments for their feedback—including health, justice, social affairs, interior, and foreign affairs ministries as well as the National Committee for Counter Trafficking.

The draft had been sent to the related ministries three times—the third time being the final—and an inter-ministerial working group had also helped ensure information was passed along, Mr. Puthborey said.

“We have an inter-ministerial working group, which is composed of [representatives from each ministry], and we requested them to bring the main principles to pass to their ministers,” he said, adding that once input had been received and the government agreed, the draft would be put forward in Parliament.

The spokesman said the draft would likely be turned into legislation by the end of the year.

A three-page job advertisement posted to the ministry’s Facebook page said it was seeking “individual legal consultancy for the formulation of surrogacy law.”

“While the draft law has been made available, it is still in a rudimentary stage and needs further work by legal expertise to ensure a common basis in international norms and standards and, above all else, to expedite legislative approval process for the government endorsement planned for end 2017,” the advertisement says.

Mr. Page, the lawyer, said the recently concluded trial of Ms. Davis-Charles had been meant as “an example” that was used instead of “targeting all those who profited from surrogacy.”

Sam Everingham, director of Australia-based advocacy group Families Through Surrogacy, said commercial surrogacy in Cambodia might not have been able to operate ethically even if it had been made legal.

“The key issues here are avoiding exploitation of ill-prepared, poorly screened surrogates who might later regret their decision,” he said in an email. “In a country with high levels of corruption, it may be impossible to monitor that appropriate screening and compensation are provided.”

Nevertheless, he added, the government’s response—although “painfully slow”—indicated “concern for the welfare of both surrogates and unborn children.”