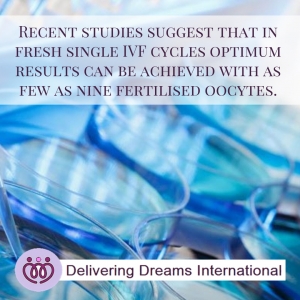 Recent studies suggest that in fresh single IVF cycles optimum results can be achieved with as few as nine fertilised oocytes. This is in contrast to results in cumulative cycles, where the more oocytes, apparently, the better.

Despite a shift in some regions to milder IVF protocols and single embryo transfer, today remains 'an era of aggressive stimulation', according to the Society for Assisted Reproductive Technology (SART) in the USA. This trend, SART explains in reporting a new study on oocyte number and pregnancy outcomes, has depended largely on the simple historical fact that IVF success rates improved when stimulation protocols allowed more abundant egg collections.(1) Today, the advantages of many eggs are said to include the likelihood of more embryos, a better chance of blastocyst transfer, and sufficient embryos for storage. Such a view seemed given scientific authority in the well cited study of Sunkara et al in 2011 which found, after reviewing more than 400,000 cycles in the HFEA database, that the best chance of live birth was seen when around 15 oocytes were collected, with an odds decline after 20.(2)

Now, SART has also studied the association between the total number of oocytes available and pregnancy outcomes - but in a first fresh IVF cycle with single blastocyst transfer - and found that the chances of pregnancy and live birth increase significantly with every additional fertilised oocyte up to nine, but decline after that. Importantly, the results were calculated in a first fresh autologous cycles with a single blastocyst transfer, which, the authors stress, is the protocol recommended in ASRM guidelines for patients under 38, and one widely followed in Europe.

A total of 15,803 patients were analysed from the 2014–2015 SART data, with the number of eggs available in each cycle plotted against outcome. The odds of a clinical pregnancy and of a live birth were 8% higher for each additional oocyte up to nine and declined by 9% for every additional oocyte after nine. These odds ratios were statistically significant and, say the authors, support evidence for milder stimulation in cycles 'planning a fresh IVF transfer to achieve a target level of approximately nine fertilized oocytes'. However, the study drew no conclusion on the risk of OHSS associated with available oocytes (as indicated in the Sunkara et al study), nor on cumulative live birth rates, which in a recent European multicentre study continued to rise with more eggs and with no plateau in sight.(3)

So despite SART's caveat that 'our study design reflects current ASRM transfer guidelines', there's a touch of the past to a study which ignores freezing and cumulative outcomes, especially at a time when in some registries live births from frozen transfers are beginning to overtake those from fresh. Thus, an accompanying editorial to the SART study suggests that its underlying message - that more may not always be better - may only be appropriate in couples happy with a fresh single embryo transfer.(4)

However, 'in many cases,' adds the commentary, 'the patient will prioritize maximum egg yield over fresh transfer, or prefer frozen transfer from the onset (for preimplantation genetic testing or embryo banking).' Thus, in an era not of aggressive stimulation but of vitrification, cumulative LBR based on live deliveries from the fresh and frozen transfers following a single ovarian stimulation and oocyte collection does seem a more meaningful measure of treatment success.

The European study of 2018, which was based on a retrospective analysis of 14,469 patients and was billed as the largest multicentre study evaluating the impact of ovarian response on cumulative LBR, found cumulative outcomes continuing to improve with an ever increasing number of eggs available, and reaching 70% when more than 25 eggs were retrieved.(3) However, no plateau effect was observed, although the cumulative rate did fall when initial cycles collected 27 oocytes. The investigators thus concluded that ovarian stimulation may not have a detrimental effect on oocyte/embryo quality in good-prognosis patients, although they did warn that 'patient convenience' and risk of OHSS should be considered, especially in very high ovarian response.

A new registry study from the Australian and New Zealand Assisted Reproduction Database further suggests that it is female age which dictates the optimum number of eggs needed for those IVF cycles giving the maximum cumulative LBR.(5) Thus, while the multicentre study above suggests that larger oocyte yields are indeed associated with a greater likelihood of cumulative LBR per aspiration, this association according to the Australian study is not consistent across all female age bands. Overall, the study, which analysed more than 220,000 cycles performed since 2009 in Australia and New Zealand, again found that the number of oocytes retrieved in the first cycle was a significant predictor of cumulative LBR, but, after stratifying by female age, the rate of increase in cumulative LBR per additional oocyte retrieved was found lower in the older age groups. Thus, cumulative LBR appeared to be maximised when around 25 oocytes were retrieved from women aged between 18 and 35, more than 30 from women between 36 and 44, and around nine from women aged 45 and older.

How can these two apparently inconsistent findings - LBR in a single fresh cycle and cumulative LBR in fresh + frozen cycles - be reconciled? The former scenario would suggest that the likelihood of success declines after eight or nine eggs are retrieved, while the latter suggests no such cut-off and an ever-improving chance. There is first the possibility that high responders in a fresh cycle are switched to a freeze-all cycle, which may well skew the comparison. But could it also be that the optimum protocols for patients who hope for a single live birth or for a large family from their IVF are actually different?

The studies also beg the question of how many eggs offer the best chances of live birth in banked egg donation treatments, or indeed in elective egg freezing services. A study from Ana Cobo and colleagues in Spain of 1400 women having egg freezing (for various reasons, including age) also found that the probability of having a baby increased progressively according to the number of oocytes used.(6) The increase was found to be rapid until oocyte numbers reached 10-12, and slower from the 20th onwards. However, the age at which the eggs are frozen has also emerged as an important variable. For example, a study which modelled the likelihood of live birth based on outcomes in 520 egg-freezing patients in the USA found that a 35-year-old woman with ten eggs has a 69% chance of a baby, but two years later, at age 37, that chance has reduced to 50% - and so on such that at age 39 she has a 39% chance. Right now, of course, clinics can do little more than provide an educated guess as to how many oocytes (or stimulation cycles) might be needed to offer a reasonable chance of later success; the evidence is only slowly accumulating, and even then with inconsistencies and small numbers in support.

Would you like to learn more? Please contact us to share your challenges, ask questions and discuss solutions. This email address is being protected from spambots. You need JavaScript enabled to view it., www.Delivering-Dreams.com and www.international-surrogacy.com, 1.908.386.3864

Join our exclusive IP Facebook group for support, information and inspiration to help you explore and navigate a successful Ukrainian surrogacy. https://www.facebook.com/groups/internationalsurrogacynetwork

Read 361 times
Tweet
Published in Blog
More in this category: « FUN & GAMES Rosanna Davison says parenthood will be next ‘juggling trick’ as she wishes ‘best pal’ Wes Quirke happy birthday Why Are Women So Mean to Infertile Women? »
back to top