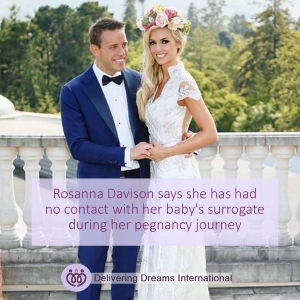 Mum-to-be Rosanna Davison revealed she has had no contact with her baby’s surrogate throughout the pregnancy journey.

The 35-year-old is due to welcome a baby girl next month through surrogacy.

In a heartfelt admission, she admitted it has been weird for her knowing somebody else out there has been experiencing her baby’s kicks and growths.

Lifting the lid on her journey to motherhood, the former Miss World beauty told Irish Mirror: “We have had no contact with the surrogate, they keep that totally separate. There is an agency who does all the co-ordination stuff.

“We have kind of kept busy this year with work and house stuff because it is weird to think about someone else experiencing the little kicks and the hormones and the tiredness that comes with being pregnant so yeah, we’ve managed.”

In July the Dublin-born model, who is the daughter of Lady in Red crooner Chris de Burgh, announced she’s expecting her first child with husband Wes Quirke via gestational surrogate in November, and bravely opened up about suffering several miscarriages in the past.

Rosanna has since been hailed as an inspiration for others who have suffered issues with fertility and child loss and credited by her thousands of followers for being so honest about her journey.

Just three weeks before she is due to welcome her “dream” baby girl, Rosanna opened up about her mother Diane’s own struggles in the past.

She said she feels lucky to live in a time where surrogacy and alternative options are widely available.

Rosanna, who has various science degrees under her belt including Master of Science degree in Personalised Nutrition, added: “We are so lucky now with the leaps and bounds of science.

“I look at my mum who had her own issues seperate to mine but she wouldn’t have had the options I've had so we are so lucky these days.

“I just think it is a miracle there can be a woman thousands of miles away carrying our biological child. It is a miracle to us. It’s really incredible.”

Looking back at her decision to go public with her news, the author said she feels her decision to talk openly over the past few months has helped her in the process. And encouraging others out there not to suffer in silence, she said: “It was really important to us to kind of talk about our journey
and our experience and normalise the conversation about fertility and pregnancy loss and show people who maybe are struggling – which according to statistics is one in sixcouples.

“So to show it is more common than we realise and there are more routes to parenthood than just the traditional sort of ones.” The influencer, who admitted she had some anxiety at the beginning of the process, added: “I think being open and talking about it has been really helpful for the whole process.

“So I would encourage anyone who is going through pregnancy loss or fertility issues to try and talk to family and friends and be open about it.

“It really does help and it helps to reduce the sense of blaming yourself for everything and the sense of guilt because it such a complex, sensitive issue.

“I understand why people talk about it more because it is so wrapped up in emotion and sort of feelings of blaming yourself and things.

“I think people appreciate that and even in my close friends group, a number of them have suffered pregnancy losses so it’s a part of life, unfortunately.

“But it is just about normalising the conversation a bit more and being able to talk about it and show people there is hope at the end of the long journey.”

Rosanna and Wes shared some snippets of their growing baby through scan pictures, but have opted to keep the location and details of their surrogate private.

But ready to receive a phone call any day now, Rosanna revealed she is spending this weekend getting her baby bags packed before she and her hubby Wes Quirke jet off to meet their little girl.

Bursting with excitement, she said: “This weekend we will be packing I suppose the equivalent of the hospital bag, which is our baby suitcase, so we are bringing everything from clothes to nappies to wipes and all the bits and pieces and I’ll pack my own suitcase to be ready to go.

“We will stay there a few weeks I think, just because she will be brand new and we have to get her emergency passport and get various papers organised as well.

“But the nice thing is on her birth cert she is immediately ours, there is no mention of surrogacy, she’s an Irish citizen immediately so it has all worked out very well.”

It’s been a busy year for the model who gratuated from her masters degree in London in July and it soon to get even busier with a new arrival on the way.

However, speaking at the TanOrganic Beauty Blog awards – where she won the Nutrition category – Rosanna said the timings couldn’t have worked out better.

She said: “It’s been the kind of year where we put in a lot of the groundwork.

“Last year at Christmas I did my masters and the surrogacy process began at the beginning of last year.

“It’s a long process so yeah it’s all coming together now and it’s really nice. All the hard work is [coming to the surface]. The timing worked out really well because, funnily enough, the day I submitted my dissertation was the day they found our surrogate in January so it all kind of coincided well.”

And feeling positive about what her future holds, Rosanna added: “So next year is just of case of continuing to work with TanOrganic and other work obligations but also just getting used to being a mother and having a new baby.

“Then in the next year or two I want to look into the nutrition side, whether it is a brand, or a clinic and it is important to me to continue to do what I am passionate about as well.”

Read 774 times
Tweet
Published in Blog
More in this category: « We Blamed Women For Infertility For Actual Centuries, & Nothing Has Changed Sylvia DeMott interview »
back to top
Learn more
Book meeting