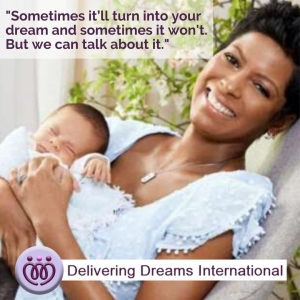 The 49-year-old dedicated an episode of her daytime talk show to the topics.

During Monday's episode of her eponymous daytime talk show, Tamron Hall's son Moses made his television debut. But his journey to a TV screen was not a simple one. Since welcoming her son in April, and since announcing she was pregnant shortly before, Hall has been candid about her fertility struggles and the journey she and her husband underwent with in vitro fertilization to conceive their son.

Prior to Monday's show, the 49-year-old spoke with Allure about IVF and why it was important to her to be so open about her path to motherhood, even dedicating an entire hour of television to the topic.

"This is not an issue exclusive to women," she tells Allure. "It's a parenting journey. We wanna hear from men and couples perusing this in a number of ways. Now so many stigmas have been broken down and so many stereotypes have been demolished that if you can't conceive you’re not flawed. Your body is not betraying you. It's a journey, and sometimes it’ll turn into your dream and sometimes it won't. But we can talk about it."

Hall is passionate about addressing the often-ignored stigmas surrounding IVF — especially the emotional ones. "Clearly there has been a stigma associated with fertility in general," Hall says. "The stigma has certainly been beaten back and debunked, and we're more willing to show these sides of ourselves. But we don’t talk about the mental health aspect of it enough, the loneliness enough, because it's easy enough to hide these things and make it about the physical nature of it. But, for me, it's a whole-body experience and a whole journey that can be shared."

She also explains that she believes the accessibility around IVF isn't discussed nearly enough — a realization she came to when she forgot her medicine while traveling.

"I live in New York City so I can go to a speciality pharmacy 24/7 or see a specialist. That's not always the case," she says, adding, "It had a personal effect on me when I was talking my injections and traveling...I forgot my medicine. I was packing and me and my husband always had a checklist he would count the needles and [ask] 'Do you have the valve, an extra valve?'" She continues, "I called multiple pharmacies where I was and no one could get the medicine to me." Eventually, Hall was forced to leave her trip and return home so she could get her shot on time.

Also during Monday's episode, Hall invited reality star and former Real Housewife Gretchen Rossi and her partner Slade Smiley, who conceived a daughter through IVF. The couple spoke about going through the process five times before finding success, a process which also made them passionate about making in vitro more accessible and affordable. (They are teaming up with Sen. Cory Booker to address some of those issues.)

But accessibility and affordability are just the tip of the iceberg when it comes to the IVF process. Another huge and very real part is pain. Hall tells Allure that when she was traveling, she would need to ask friends who lived nearby to meet her to help administer her shots. "When I was traveling, I was afraid to give myself the injections. It was very painful and I couldn't work up the nerve... It's brutal."

She continues, "I'm fortunate to be able to have this procedure and access but the pain is real. You don't want to be ungrateful, you don't want to minimize what chance you have right now that someone else would beg for. Even though I was grateful and this was an opportunity I had, it still hurt. I'm still bleeding."

During the episode (which also happened to air on Hall's birthday), the host got emotional discussing those very needles.

"These are the needles that it took to make Moses," Hall says, holding several containers. She continues, tearing up, "These came with pain, tears, and it began joy. And so I wanted to share this because all of these went into my body so that I could become a mom."

Read 1100 times
Tweet
Published in Blog
More in this category: « Here’s everything LGBT+ couples who are considering surrogacy need to know Tamron Hall Shares This Advice for Women Going Through IVF »
back to top
Learn more
Book meeting