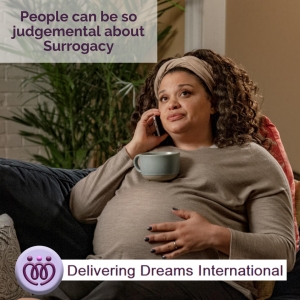 MichelleButeau: I Always Wanted Kids—I Didn’t Realize How Hard It’d Be to Have Them

The First Wives Club star opens up about her journey to become a mom: "I wanted so much to be pregnant that it took over me like a bridezilla for the uterus.”

You've seen Michelle Buteau in movies like Always Be My Maybe, Someone Great, and Isn't It Romantic. Now you can see her in First Wives Club on BET Plus. She’ll also take the stage for Together Live in New York City this fall.

I always wanted to have kids. I knew I wanted to be a mom back when I was still just figuring out word problems in math class. I was an only child, so I wanted to have a crew—people who were related to each other just mixing it up.

My husband and I had a lot of fun together before we started trying for kids. You start having sex with higher meaning, like holding your legs up at the end and hoping it takes. There was a fun element—that feeling of, we might do this. We had a lot of hopeful, fun sex. But then nothing happened. We spent almost a year trying.

I didn’t get my period for two months. I was taking pregnancy tests, but nothing was showing up, so I went to the doctor and took a blood test. The results came in: I had high levels of prolactin, a hormone that controls the production of breast milk, so I was diagnosed with Prolactioma. The condition isn’t life-threatening, but it can cause infertility. Your body thinks you’re pregnant, but you’re not.

I felt like I was being punished for wanting a baby. I was 36 at the time.

I read articles about holistic medicine that said I could still get pregnant on my own with this condition. But by then, sex had became a chore. Work and all the travel that comes with it made it hard to sit and spin on that dick when you want to. We tried for almost another year.

My endocrinologist suggested I see an infertility specialist to talk about IVF. I was sad

about it—I felt like my body had defeated me. But I met with the doctors at the IVF clinic, and they made it seem possible we could have a baby. Of course, it wasn’t covered by insurance, as if being born female was a pre-existing condition. I felt like I was being punished for wanting a baby. I was 36 at the time.

We did a lot of rounds of IVF. It was insane. I wanted so much to be pregnant that it took over me like a bridezilla for the uterus.

Four or five rounds of IVF and four miscarriages later, I was done. I was exhausted. I didn’t recognize my body. I had cut people out of my life who already had kids. My husband and I started looking to sell our house and get a smaller place upstate so we could afford a surrogate. My mom eventually stepped in and helped us financially, and I was elated—but also sad. I wanted so badly to be pregnant, but I hit a wall and couldn’t do it anymore. I was glad that someone else could. So even though I felt sad, I also felt free.

I wanted so much to be pregnant that it took over me like a bridezilla for the uterus.

In New York, it’s illegal to use a surrogate unless you’re related to the person, so we drove three hours to Pennsylvania to visit our surrogacy agency. We met one surrogate who had six kids and was willing to help. It’s pure light when someone says they want to help a stranger in need for the greater good. We started going to ob-gyn appointments with her. We were so invested. And then, the day of the transfer implantation with the embryos, the doctor said there were complications and we couldn’t move forward. It was like having a miscarriage all over again.

We found another surrogate. I was filming Always Be My Maybe in Vancouver at the time, so I couldn’t meet her but told her, “Godspeed.” It was a crazy mindfuck because in the film, I was playing a pregnant person right as someone else was getting impregnated with my DNA. In the elevator, people would ask me if I wanted to be pregnant. I’d say, “One day. We’re trying.”

People can be so judgmental about surrogacy. They think you’re rich because you’re getting a surrogate. Or you’re doing it to keep your body intact. People would ask why I’d have a child in Donald Trump’s America. My response to them: “Please never come over, unfollow, unsubscribe.”

Just because you don’t do this part of the journey doesn’t make you less of a mom or a woman.

Thankfully, the embryos took and my surrogate became pregnant with my twins. Nine months later, when I held my babies for the first time, it was wild. It was insane, over the top. There’s not one word you can use to describe it. It was a marathon of emotions. I was so tired, but had finally reached this goal. They are two souls who joined the world, and it will forever change us. I have girl-boy twins who are now seven months old and just learning how to crawl. Hazel is more compact and crawling, and Otis is my bigger baby boy. He’s not sure what to do with his big head.

Motherhood is fast and furious, but it’s also helped me to slow down and taste the rosé. The biggest challenge of motherhood is time management. When I’m with my babies, I think that I should finish that writing thing, but I also want to see how they eat their newest baby food. While I was filming Always Be My Maybe with Ali Wong, she’s finishing a book, doing rewrites, starring in a movie, all while her babies are with her and she’s still pumping. And she’s exercising every day. She is one of the most hardworking moms I know.

Becoming a mom is not easy for everyone, but it is possible. Just because you don’t do this part of the journey doesn’t make you less of a mom or a woman. You decide emotionally what you can handle in your relationship with your surrogate. You take the shame out of it, and no one can put anything over you. The biggest thing about it all is don’t beat yourself up

Read 1775 times
Tweet
Published in Blog
Tagged under
More in this category: « Proposed Legislation I found a surrogate »
back to top
Learn more
Book meeting