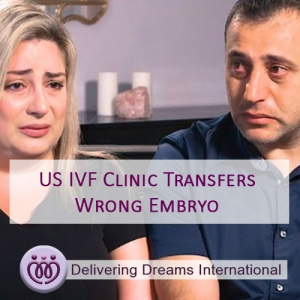 With regulations, cameras and protocols for double monitoring, we hope this can't happen in Ukrainian Surrogacy.
This article uncovers the devastating effects of the wrong embryo transferred into the wrong couple by a US ivf clinic.
The California couple whose embryo was wrongly implanted in a Queens woman by a bungling Los Angeles fertility clinic finally got to meet their newborn son on Mother’s Day weekend.
But weeks of legal wrangling and an agonizing secret courtroom hearing left Anni Manukyan and her husband Ashot unsure of whether they would ever see their baby.

“We were so anxious to get him,” she told The Post. “I would cut off my right leg to have him in my arms.”

Anni, 36, had already suffered a failed round of IVF when she got a call from CHA Fertility in April, asking her to come in for a cheek swab. The facility downplayed the request as “quality control” but Ashot Manukyan wasn’t buying it.

Days later, CHA broke the news: They had a son. The clinic had implanted two embryos from different families, including one belonging to the Manukyans, in an Asian woman from Flushing who gave birth to “twin” boys March 31.

“I was about to faint,” Anni said.

After dropping the bombshell, the clinic refused to share details about the infant, citing privacy laws. Lawyers for the Queens birth parents also stonewalled.

When the Manukyans frantically sent a letter warning that the baby might have reflux, as their older daughter did, the lawyers sent the couple a brusque reply: “Tell your client not to tell my client how to take care of their children.”

“I burst into tears,” Anni said.

Frustrated, she called Manhattan attorney Eric Wrubel, a veteran family law expert who had adopted his own kids with his husband.

Wrubel rushed to Manhattan Supreme Court, applying under seal to put the case before a judge immediately — keeping it out of the public eye.

Anni and Ashot left their 7-year-old daughter in the care of her grandparents, and flew to New York, where on May 6 new DNA tests were done.

“Imagine being in the best city in the world and being depressed and crying the whole time,” Anni said.

They walked the streets of Manhattan to pass the time. At one point, they spotted an Asian couple with newborns strapped to their chests.

“We just hugged each other and started crying,” Anni said.

Yet the Queens birth mother battled on, begging in a heart-wrenching letter to keep both babies:

“I kiss his little feet every day. I give him a bath. I breast fed him,” she wrote. “We’re their true parents and we’re the ones who want to be with him. We love them, they’re ours and they’re twins, they shouldn’t be separated.

Wrubel was already prepping for the day the Manukyans would get their baby. He hired a psychiatrist to plot out the best transition for the newborn.

The shrink instructed Anni and Ashot to hand over the pillowcases they slept on, so their son could get used to their smell, and recordings of Anni reading, so he could hear her voice.

“My voice was shuddering while I was doing it,” she said. “It was just heart shattering. Me and my husband, we wondered what if the pillows we slept on, what if the scent wasn’t enough? We were hugging the pillowcases just to make sure.”

The two couples came face to face on May 10, and the judge cleared the courtroom.

“They came in and they were crying, and I saw them crying and I started bawling. My husband was trying to hold me,” Anni recalled. “Even the security guard was crying.”

About an hour of legal arguments followed, said Wrubel, who noted, “There was no question of facts. Everyone knew what had happened.”

Wrubel based his case on the idea that genetically, the baby born of Anni and Ashot’s embryo was always intended to be theirs.

After a short break, the judge gave her decision from the bench.

“It was the most emotional and devastating proceeding I have been involved in, in 25 years of practice,” Wrubel said. “You could hear a pin drop.”

“I’m shivering at this point,” Anni said. “I’m just looking at Eric and shaking. I don’t know what the judge is going to say.”

The judge “started off … by saying she was so sorry that this happened, and so sorry the couples had to be here,” Wrubel said.

“‘But in the end,’” Anni recalled the judge saying, “‘DNA is DNA and genetics play a big role in everything, so the baby belongs with Anni and Ashot.’”

What followed “was an outbreak of sobbing by both couples,” Wrubel said. “Neither couple could speak.”

The judge ordered a short transition that would include two six-hour visits for the Manukyans and their newborn over the weekend, before a final handoff on Monday.

After a burst of hugs between the Manukyans and their lawyers, the couple quickly grabbed drinks in the city to celebrate, then took a whirlwind excursion to BuyBuyBaby in Union Square, where they plunked down $600 on clothes and necessities. Anni spent the night washing baby outfits in their hotel room, laying them out to dry.

They arranged for their daughter to come to New York.

“I didn’t know how the heck to tell her,” Anni said. The girl had wanted a sibling, but after spending $120,000 and years trying, her parents hadn’t been able to give her one.

“We’re a Christian family, we pray every night and every single night she’d say, ‘God, Please give me a brother or sister,’” Anni said.

The girl’s nightly plea through years of infertility was “like a punch in my heart.”

When the girl found out a baby brother was coming, she cried out, “Mommy, God finally answered my prayers!”

For the first visit Saturday, Wrubel hired a babysitting service and a town car to ferry the baby from the Queens couple’s home to their hotel.

“I had a big ass blanket, it was raining in New York and I don’t want my baby to get sick,” Anni recalled.

When the car pulled up, “I was running, my husband had the umbrella over my head we just ran and grabbed him.”

Covering the car seat with the blanket, they raced back inside and put it on the floor of the hotel lobby.

“I opened the blanket that was on top of him and I didn’t know what to feel, my emotions were all — I was crying. He was so tiny, he was so delicate. I just held him for six hours.”

They named him Alec.

“If I did not have Eric, I do not think I would have my baby right now,” she said.

On Monday, while Wrubel wrapped up the legal details and helped get the baby a name change, new Social Security number and birth certificate, he had the couple rent a conference room in the hotel, where they finally met with the woman who ushered their baby into the world.

The Queens couple, who filed their own lawsuit against the CHA fertility clinic last week, have been identified only as A.P. and her husband, Y.Z.

Meeting the birth mom was crucial for Anni.

“I need[ed] to thank her personally, because she deserves that. She carried my child for nine months, she fed him, she took care of him, she changed his diapers. It could have ended up differently.”

“We were hysterically crying, all four of us,” Anni recalled. “They were saying, ‘We’re sorry, we’re so sorry. We should have let you guys come and take him before, it’s just that we love them. We wanted to take care of them as they were our own. We love them.’

“There was no tension in the room whatsoever. It felt like we were friends. … It was just love, because we all have love of the same child.”

A.P. came bearing gifts, given to Alec when he and his “brother” were born.

A.P. was supposed to have been implanted at CHA with two of her and Y.Z.’s own female embryos, so the couple thought they were having girls. The gifts included gold bracelets, one celebrating the Year of the Pig and another with a crown; and a ring emblazoned with tiny baby shoes.

She had saved Alec’s umbilical cord, a tradition in A.P.’s Asian culture, and wanted to ensure it went with him, along with a tiny pink pillow from her mother, Anni said.

A week after giving Anni and Ashot their baby, A.P. and Y.Z. relinquished Alec’s “twin” to his biological family. That family does not want publicity, Wrubel said.

The Manukyans, who are also suing CHA, flew home first class with Alec on May 13.

“I’m enjoying every second of him,” Anni beamed Thursday. “He’s so cute. He’s already cooing. We’re in love with him.”

Anni now knows CHA also used at least one wrong embryo for the failed IVF procedure she endured before learning of Alec’s existence.

“I really want them to shut down that fertility clinic. … God knows how many times [this has] happened?”

Drained by the experience, Anni has a saving grace: Alec.

“I look at his face and everything goes away.”

Read 572 times
Tweet
Published in Blog
More in this category: « Fertility in the Workplace: Women are still Suffering Amy Schumer Wishes All Could Afford IVF »
back to top
Learn more
Book meeting