Paying gestational carriers should be legal in all states 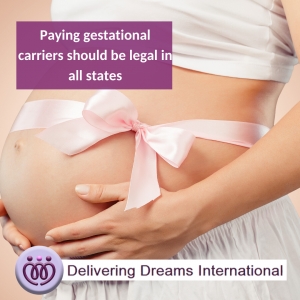 Every year, hundreds of thousands of babies are born in the U.S. using assisted reproductive technologies, a multibillion-dollar industry that is controversial and largely unregulated.

One of the controversies involves the use of paid gestational carriers, women who agree to carry a fertilized embryo, created from another woman’s egg, give birth, and give the baby to its parents. This is different from tradition (or genetic) surrogates, who provide both their own eggs and their own wombs. Gestational surrogacy now constitutes 95% of all surrogacy in the U.S.

State laws about arrangements for gestational carriers vary widely and are in flux. This kind of surrogacy is currently allowed in 10 states; prohibited but with various caveats and additional legal proceedings in 30; practiced with potential legal obstacles and inconsistent outcomes in five; practiced but with legally unenforceable contracts in two and prohibited in three. Several of the 40 states with real or potential legal hurtles require that couples be married and heterosexual, or allow surrogates to choose at any point to keep the baby.

Commercial surrogacy first gained wide attention in the 1980s through the Baby M case. Elizabeth Stern had multiple sclerosis and feared that pregnancy would worsen it. Through a newspaper ad, she and her husband connected with Mary Beth Whitehead, who agreed to carry a fetus for them as a traditional surrogate, providing both an egg and a womb. But after giving birth, Whitehead decided to keep the child. A New Jersey court awarded the Sterns custody of Baby M, but banned all such future surrogacy contracts.

Since then, practices have changed and the use of gestational carriers has grown dramatically. In many states, however, prospective parents need to travel to other states, like California, to avoid legal obstacles. Some seek surrogates in the developing world, which has its own set of problems.

In June 2019, the New York state Senate voted to legalize gestational surrogacy. The pushback was swift and strong. Noted feminist Gloria Steinem argued strongly against the proposal, raising concerns that poorer women of color would disproportionately serve as gestational carriers. She also pointed out that the bill would require surrogates to be state residents for only 90 days, which could prompt human traffickers to bring women to New York to serve as surrogates. The State Assembly then rejected the proposal. Lawmakers are now considering at least two different revised versions of the bill — one from Gov. Andrew Cuomo and one from the bill’s original sponsor — that address these criticisms.

I believe the state should legalize gestational surrogacy, providing it includes protections to avoid the problems Steinem highlighted.

In the debates in New York, as well as those in other states, both sides have been arguing in the relative absence of data, without acknowledging this deficit. In fact, the limited data available so far do not suggest that women become gestational carriers because of financial distress, nor do the demographics reflect racial disparities.

The professional association of in vitro fertilization doctors, the American Society for Reproductive Medicine, has set standards that gestational surrogates should have previously given birth to their own children and are thus aware of what to expect. Many IVF doctors reject surrogates who are financially unstable or on public assistance or may not follow optimal diets and other healthy behaviors during pregnancy.

A major review of studies on surrogates, published in 2009, concluded that the profile of surrogate mothers “does not support the stereotype of poor, single, young, ethnic minority women whose family, financial difficulties, or other circumstances pressure her into a surrogacy arrangement.”

The Centers for Disease Control and Prevention currently asks fertility clinics to provide some data on assisted reproduction, such as numbers of IVF cycles and the success rate, but such reporting is voluntary, and the amount of nonreporting is on the rise. The CDC does not seek or publish data regarding gestational surrogates’ race, ethnicity, education, and socioeconomic status.

Only one published peer-reviewed journal article, from 2008, reports data on gestational surrogates in the U.S., but includes only 15 women, all of whom had served as surrogates over 22 years ago. Among these 15 women, about 80% were Caucasian, 18% were Hispanic, 65% had some college education, and their average income was $30,000-$39,999.

For a new book, I interviewed dozens of IVF providers and patients. During these conversations, I sensed that many surrogates make informed choices and do not feel exploited, fully understanding the risks and benefits involved and having previously had their own children. They feel that getting paid up to $90,000 for nine months of pregnancy while staying at home is a decent “salary” for this work, providing income they otherwise wouldn’t have. Many are housewives, particularly military wives. Altruistic and humanitarian reasons may help motivate many of them.

Still, no solid data have been published about why U.S. women decide to become paid gestational surrogates, how they view the experience, and whether they feel exploited.

Rather than battling about this legislation, lawmakers in New York and beyond should work together to establish safeguards and protections to ensure that gestational surrogates make fully informed and voluntary choices. State and federal government agencies can reduce risks to women by setting clear guidelines regarding informed consent and establishing surrogacy as a job with adequate payment and protections, instituting strict state residency requirements of at least a year (to avoid human trafficking), and mandating the collection of socioeconomic data about surrogates to provide evidence regarding whether women of certain ethnic and racial backgrounds are being disproportionately hired.

The CDC could do its part by requiring IVF clinics to provide data about current practices, not asking them. The National Institutes of Health and other government institutions should also fund ongoing systematic research to understand how women see these issues, rather than having others speak and decide for them.

Gestational surrogacy can allow tens of thousands of prospective parents to have children. States should support rather than block the creation of such families.

Read 286 times
Tweet
Published in Blog
More in this category: « Surrogacy: Who decides to become a gestational carrier? ‘It takes a lot of trust’: Surrogate delivers first baby of 2020 at UPMC Carlisle »
back to top
Learn more
Book meeting