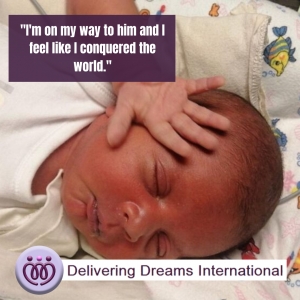 California couple takes winding path to parenthood through surrogacy, Ukraine and COVID-19 How much does surrogacy cost

A Californian couple that has been trying to have a baby for an agonizing 17 years is going to have to wait a little while longer due to the ongoing COVID-19 pandemic. But thanks to a surrogate in Ukraine, they have what they've waited so long for.

Yuvaraj and Sarvicka Nagendram, 56 and 49, respectively, called their new baby "the gift of a lifetime," but the journey to adoption was a long one that's still not over.

The couple, from San Leandro, just south of Oakland, learned in early May they finally had a son from a surrogate mother in Ukraine. But travel restrictions have prevented them from uniting with the long-awaited baby.

Yuvaraj and Sarvicka got married in 2007 in Canada. Yuvaraj is a U.S. national and a software developer. Four years ago Sarvicka, who was diagnosed with uterus fibroids, learned she couldn't give birth to a child for themselves.

In June 2018, the couple found an agent in Ukraine, who took them to the surrogacy motherhood center BioTexCom in Kyiv.

"He responded quickly, he was very responsive on my questions and everything. So I decided to go to Ukraine," Yuvaraj said. "When we met I liked him, he's a very good person. And at the clinic they were very nice to us."

But the much-wanted baby still didn't come easy. Yuvaraj and Sarvicka gave their biological material, but it took three cycles to make the impregnation successful.

"Then we had to wait until the birth. Time was moving so slow. We felt terrible," the couple said.

Finally, on May 5, the agent called to say that the baby boy had arrived.

"We were so happy. When we saw the pictures, my wife cried and I sat very quietly," Yuvaraj said. "At the same time, we were confused. We wanted to celebrate, but due to lockdown we were worried when we will be able to see him."

They still don't know the exact time of birth.

Then, he and Sarvicka had to figure out how to take their beloved baby from a country that is under lockdown due to the coronavirus pandemic. Ukraine, which has had more than 17,000 cases of COVID-19, has banned all international flights.

They weren't the only couple that faced such an obstacle.

As of April 30, 46 babies born with the help of BioTexCom specialists were waiting for their foreign parents at a Kyiv hotel, called Venice. In a video published by the company on its YouTube channel, all the newborns are seen in one room. A woman, who presented herself as a hotel administrator, said they are being taken care of 24 hours a day.

"All children are gaining weight steadily," said pediatrician Tatiana Lisovskaya. "We've chosen formula and its dosage individually for every baby."

"We show babies to their parents online and our managers arrange video calls," the nurse says in the video. "It's heartbreaking to see how parents miss their little ones."

But Yuvaraj and Sarvicka haven't had a single video call with their child since he was born.

Yuvaraj tried to book a ticket on different flights to Ukraine, but the airlines demanded permissions from the Ukrainian government. He addressed the U.S. Embassy in Ukraine, but officials required an itinerary and a flight booked to facilitate the journey. Eventually, Yuvaraj booked a flight to Minsk, Belarus, for May 16, while still waiting for permission from Ukrainian authorities to enter.

Meanwhile, the video with the crying newborns sparked outrage in Ukraine.

Ukraine's Commissioner for Human Rights, Lyudmyla Denisova, responded to the outrage, saying, "A law should be changed for the reproductive technologies to be provided to Ukrainian citizens only. In Ukraine, children shouldn't be a trade matter."

Current Ukrainian laws do not regulate surrogate motherhood entirely. The relative freedom has led Ukraine to be Europe's surrogacy capital.

"There's an article that said, 'If a baby is born by a surrogate mother, its biological parents are the ones considered to be parents,'" Sergii Antonov, a Ukrainian lawyer who specializes in legal advice on reproductive technologies, told ABC News. "We don't have discrimination by nationality -- foreign and Ukrainian citizens have the same rights."

Women between 18 and 38 years old can become partners -- donating eggs or as a surrogate mother. The center pays surrogates $15,000 for the first kid and $22,000 for two kids in addition to about $2,000 for food during the pregnancy.

BioTexCom charges more than $40,000 -- it has packages for 49,900 euros or 64,900 euros -- for a couple to have a baby from a surrogate mother in Ukraine, not counting travel and accommodation expenses. For Yuvaraj and Sarvicka, who went through three cycles, it cost much more.

"To have a surrogate baby in Ukraine is much cheaper than in India, Thailand or the U.S., so many foreigners prefer to come here," Antonov said. "When surrogacy started to develop in Ukraine, foreigner were 15% of clients, now they are more than 85%. It drives the authority mad."

Antonov argued that the number of overseas clients doesn't mean foreigners should be banned from having surrogate babies in Ukraine.

"We have suggested a lot of law amendments to protect both children and surrogate mothers, but the authorities don't understand and linger," he said.

After the video went viral, Denisova said something should be done urgently to reunite the babies with their parents. On Friday, Yuvaraj and Sarvicka received a letter from the Ukrainian Ministry of Foreign Affairs saying that he would be allowed to enter Ukraine to take their son.

"We are thinking of naming him Alan," Yuvaraj said. "I'm on my way to him and I feel like I conquered the world. We think people in the world are now giving more attention to death, not a lot to birth. We just thought it's our destiny."

Delivering Dreams helps couples throughout the world struggling with infertility have children. Located in NJ and Kyiv and Lviv, Ukraine, our amazing medical facilities and professionals, surrogates and donors are in Ukraine, because Ukrainian law protects the rights of parents and their children from inception at affordable costs anad high success rates.

You are not alone. We want to be your path to parenthood. Contact us to find out more about how much does surrogacy cost.