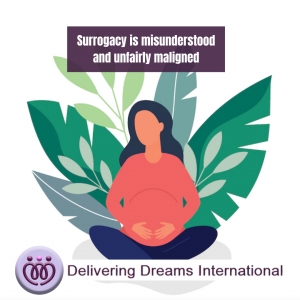 When I was pregnant with my son, I didn’t announce anything. I let photos of my growing bump speak for themselves. With twins on the way now, I’ve given a lot of thought to how to share the news because this pregnancy is completely different. Even people who have seen me in person would never even know, because my children will be born through a surrogate.

More and more, children are born through assisted reproductive technology. But where in vitro fertilization has become more commonplace, there remains an air of mystery, suspicion and misunderstanding around surrogacy. I certainly didn’t understand it until it became my only biological option to have more children.

My decision started with a medical mystery that yielded a diagnosis seemingly more fitting for a sci-fi novel. After numerous miscarriages and multiple failed rounds of IVF, I learned I am a genetic carrier of HY-restricting HLA class II alleles, which means that my son’s Y chromosome lingers and attacks all subsequent pregnancies. In essence, if you have this small genetic component and you have a boy, your odds of successfully carrying another child are slim to none. My husband and I could create an embryo, but my body could not carry it. So I started down the rabbit hole of surrogacy.

The most pervasive and damaging myth about surrogacy is that women choose it to avoid giving birth or messing up their bodies. Whenever I mentioned the most famous surrogacy advocate — Kim Kardashian — the consensus was that she didn’t want to get fat again. In truth, though, she has a dangerous condition called placenta accreta, where the placenta attaches too deeply to the uterine wall. But if Kardashian’s open revelations to her tens of millions of social media followers about her life-threatening health struggles couldn’t shift the narrative, it’s hard to imagine what could.

The reality is most of the people who choose surrogacy are heterosexual couples facing infertility or gay men who want to have a biological child. One of the most basic and primal decisions of many people’s lives is whether to have children and, if so, how many. It’s a decision made in private, without people saying that you’d be doing the world a favor by adopting (which, by the way, is also not easy or straightforward). Or people asking probing questions about why you chose to have two children instead of just one.

I’ve found that many people who advocate against surrogacy have multiple children of their own — a decision they were free to make without being questioned, because their bodies and sexual orientation made it easier to conceive. I am privileged to live in a time and be in a financial situation where I had choices. We could have adopted, or decided not to have more children. But that choice, thankfully, was one my husband and I got to make independently.

That choice isn’t a given for everyone, because surrogacy is more political than most people realize. Before my diagnosis, I didn’t know that surrogacy laws are different in each state, and that surrogacy is illegal in New York, where I live. Legislation to change that was shut down last year, and there is an array of advocates trying to end surrogacy on a national level.

The arguments against surrogacy raise valid points: Paid surrogacy commodifies women’s bodies and it’s not a purely altruistic act, because of the financial considerations. Even Gloria Steinem has advocated against it, saying it put “disenfranchised women at the financial and emotional mercy of wealthier and more privileged individuals.”

When I was considering surrogacy, all of these issues were on my mind. But then I spoke to people who were surrogates, and the more I delved into the issue, the more insulting I found those objections. We are all allowed to be paid for a whole host of things that are dangerous and invasive to our bodies — coal mining, extreme sports, going to war. And women have fiercely fought for the right to decide when we will or won’t be pregnant. The idea that potential surrogates are too naive to know the risks is condescending. And the concept that in the United States someone becomes a surrogate accidentally or against their will is laughable. Agencies and doctors involved in surrogacy have guidelines that require stringent background checks, physicals, conversations and psychological screenings.

Then there are the people who question women’s motives for being a surrogate. Opponents say that the financial component of being paid for the pregnancy negates any sense of accompanying altruism. But no one questions a soldier for being patriotic and wanting a salary. Both can be true and valid motives.

Any remaining doubts I had about the process were quelled when we were matched with a surrogate. She is a mother of two who loved being pregnant but didn’t want more children of her own. She was looking for an opportunity to earn some money but also be with her kids. She decided to become a surrogate so she could help others in a life-changing way while helping her own family. She had been a surrogate five times previously and created lasting bonds with families she helped build. This is not a woman unaware of what she is undertaking. This is a woman making a clear choice.

It’s strange but miraculous to watch our children grow from afar, in a state where surrogacy is legal, and with no control over anything that is happening to them for nine months. But we have to believe that we chose a person with the same values as us.

Which brings me to the other glaring misconception about the “ease” of using a surrogate. Many people react by pointing out the immense joy I should feel for having an excuse to get out of pregnancy: “Oh well at least you don’t have to get huge again!” or, “Hey, you can drink!” I usually smile and try to decide whether it’s worth explaining that I would give anything to be huge again, to feel my children growing in my body, to be able to breast-feed again. I would love to avoid the judgment of the sonogram tech who refused to let me FaceTime into an ultrasound because she didn’t “agree” with surrogacy. I feel fortunate to have found an incredible, compassionate surrogate, but I also mourn the loss of my ability to carry my own children.

Surrogacy is not an easy choice, and it is not undertaken without care and compassion for the woman who will give birth to someone else’s biological child. We should advocate for legal protections for surrogates, to mandate the things most doctors and agencies already ensure. We worked with an agency to make sure that our surrogate faced rigorous medical screenings for her own protection and ours, and we had her lawyer work with ours to write an equitable contract that protected her.

But the misunderstanding of the motives and the realities of the surrogates and the intended parents who pay them can be damaging to both sides. So those of us involved need to speak up, no matter how uncomfortable we may feel and despite the vitriol we might face (hello, comments section).

I want my children to grow up in a world where the method of how they came into it isn’t shrouded in misinformation. I want people to engage in educated conversations and disagreements so we can get to the best possible place to protect surrogates and the intended parents’ right to make the choice that works for them. But mostly, I want people to talk about surrogacy, to remove the stigma. We live in a world with new ethical and medical choices, so let’s talk about it.

You are not alone. We want to be your path to parenthood. Contact us to find out more about how much does surrogacy cost.

Read 291 times
Tweet
Published in Blog
More in this category: « Zach Gilford and Kiele Sanchez What is a blastocyst? »
back to top
Learn more
Book meeting