I Just Wanted a Baby, But Surrogacy Gave Me So Much More 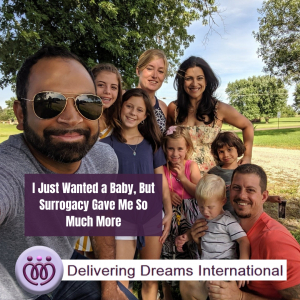 I Just Wanted a Baby, But Surrogacy Gave Me So Much More

When I started telling people I was having a baby with a gestational surrogate, the responses ranged from awkwardly supportive to just awkward. A woman at a party congratulated me, praised me for being so clever, so ahead of the times. “Ugh, you’re brilliant,” she told me. I’d have someone else do the dirty work of motherhood for me. Genius.

Others wanted me to know I was in good company: Kim Kardashian had just been through the process. So had Gabrielle Union. And Andy Cohen. And now me!

My traditional Indian mother, fiercely private and surprisingly sneaky, had another idea. She thought it might be better if we made up a story that the baby was adopted. “People aren’t going to understand this,” she said.

Misguided, to be sure, but my mother (as usual) had a point: There is still an incredible amount of secrecy around the gestational surrogacy process. And wherever there is silence, stigma isn’t far behind. It’s for rich people, it’s immoral, it’s dystopian, it’s exploitative…

I know that these are just a few of the thoughts swirling in people’s heads when I tell them that this month a woman named Amber in Kansas will deliver my son. For me, and for countless other families who struggle with fertility, surrogacy isn’t a luxury or shortcut: It’s the light at the end of a very long and lonely tunnel.

The first time I got pregnant, I had just started running for Public Advocate in New York City. It was unexpected, but welcome news. My husband, Nihal, and I were so excited. We told family and friends with abandon (12-week rule be damned!). We changed our destination wedding date so I wouldn’t have to travel in the third trimester. That was almost eight years ago, and we were blissfully, naively unaware of what was ahead of us.

I remember fantasizing about being pregnant while running for office. I imagined how I would march my big fat, swollen feet all over the five boroughs knocking on doors. I would be a symbol of feminine power on the campaign trail: a knocked-up Rosie the Riveter. My baby would be a born public servant, just like me.

When we went to the doctor for our first appointment and saw the solemn look on her face, we didn’t understand. We were no strangers to failure. I had publicly bombed a race for Congress two years before. Nihal, an entrepreneur, had learned resilience from running start-ups. But this was supposed to be easy. Isn’t this what we were born to do? We were shocked that something like this could happen, that we could lose our baby.

Two nights later I put on a brave face and got on stage to introduce President Obama at a fundraiser. It should have been the best night of my life, but I was dying inside, literally, the entire time.

Six months later I miscarried again, hours before I was slated to give a huge pitch for my nonprofit to the “who’s who” of New York City. My job was to be dazzling. I felt so much rage knowing it was easier to betray myself and go through the motions than to admit why I couldn’t.

Since then, my morbid joke is that all of the major achievements in my career have been punctuated by miscarriages. Land a TED Talk? Lose another baby.

For years I suffered in silence, feeling like a fraud. I published a book about female leadership and launched one of the largest girl-empowerment nonprofits in the country. Glossy women’s magazines hailed me as an inspiration—not least because of my openness about failure. But in private, I was living out a constant trauma that I didn’t know how to talk about.

When the kind gentlemen offered me his seat on the subway thinking I was pregnant, I didn’t say, “Oh no, sir, that’s just the 15 pounds I gained from successive failed pregnancies and IVF drugs.” I nodded politely and took the seat, holding back tears.

And when I walked into staff meetings with bloodshot eyes because I’d been awake all night, down a rabbit hole of fertility blogs, looking for comfort in statistics about IVF success rates (I didn’t find any), I didn’t tell anyone what was going on.

There is an incredible amount of shame surrounding infertility. For women who spend our entire lives trying to do everything perfectly, being unable to conceive, or carry, or deliver, or breastfeed children makes us feel inherently, fundamentally broken. At times I thought to myself I would rather tell someone I had a terminal illness than tell them I had a miscarriage. At least that wouldn’t be my fault. My failure.

Almost five years ago we were blessed to have our first son, Shaan. He was everything we had been dreaming of. At the same time, as we struggled just as hard to have a second child, it became even more difficult to talk about. Now we were just being spoiled, right? Why didn’t we just quit while we were ahead? But I knew our family wasn’t complete, and so we continued to fight.

I should point out that not everyone can afford to: At tens of thousands of dollars per IVF cycle, it’s no wonder that assisted reproduction is often viewed as an option available to the privileged few. But fertility is also a privilege.

In 2018 we were able to create a viable embryo. A boy. At 42 years old I finally had to look my inner perfectionist in the face and say: You cannot carry this baby. His life depends on it.

And that’s when Amber came into our lives. We first met her on a website, sent to us by the agency. From the looks of it, her family was everything ours was not. She had four children of her own already. We were Indian, they were white. We were blue state, they were…well, we didn’t want to ask.

Over the course of the pregnancy, we’ve bonded over the enormity of the life we are creating together, as well as the little things. Amber’s husband, Tim, learned to cook Indian food; I rode a dirt bike for the first time.

At one point last summer, watching Shaan play in the cornfields behind Amber’s house alongside her own children, our husbands standing over the grill laughing, it occurred to me how ironic it was that that so much heartbreak and isolation could have brought us here, to this place brimming over with love.

I entered the surrogacy process to have a son, and what I found was a sister, a family, and a renewed belief that people are fundamentally good. And at a time when we are so divided as a country, an unshakable conviction that we are, basically, the same. In short: I found love.

More in this category: « Baby Born from Egg that Was Matured and Frozen in the Lab John Legend says lockdown helped infertility issues with Chrissy Teigen »
back to top
Learn more
Book meeting