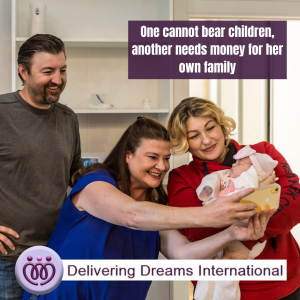 One cannot bear children, another needs money for her own family. A look at the joy and heartbreak of surrogate motherhood.

It took the Straubs more than three days to travel from Dallas to the Ukrainian capital, Kyiv. But, arduous as it was, to them the trip was worth it.

A baby was waiting for them in Kyiv. Their baby. Waiting to come home.

Whether the Straubs would be able to enter Ukraine — or would be stopped by travel restrictions aimed at halting the spread of the coronavirus — they did not know. Already, reports had emerged of parents traveling to Ukraine to pick up babies born to surrogate mothers, as the Straubs were doing, but being turned away at the border, leaving as many as 100 infants in legal limbo.

“Usually, we would just take a plane to Paris and fly straight to Kyiv from there,” Darlene Straub said. But that was before various countries — Ukraine included — imposed travel restrictions related to COVID-19.

Instead, the Straubs — Darlene, 45, and her husband, Chris, who is 43 — hopscotched from Dallas to Atlanta, then on to the Netherlands, Sweden and Belarus. From Minsk, the Belarussian capital, they took a four-hour ride to the Belarussian border with Ukraine.

Then, because only trucks were being allowed across the border, they had to walk, carrying suitcases stuffed with $14,000 in cash to pay for the surrogate mother.

As the Straubs wended their way across Europe toward Kyiv, a 33-year-old Ukrainian woman named Yulia was nearing the end of a difficult journey of her own.

Yulia was already the mother of two sons, 8 and 13 years old. Her family lived in a village in central Ukraine. Her children were left with her husband four weeks earlier when she came to Kyiv to give birth.

As it happened, the timing worked out well. Yulia’s due date had been May 30. But the baby arrived four days early, on May 26 — just as the Straubs were crossing the border into Ukraine.

“We arrived in Kyiv on May 26. That same day, we got an email from our agency, and they said our baby girl was born,” Darlene Straub said.

“Oh,” she added, happily, “her name is Sophia Faith Straub.”

The Straubs are by no means the only ones to have made the difficult journey to Kyiv. Due to travel restrictions the Ukrainian government imposed in March, dozens of other prospective parents from all over the world remain separated from their babies, who have already been born to Ukrainian surrogate mothers.

Ukraine is one of the few countries where commercial surrogacy is still legal. In recent years, this shortage of surrogate agencies has driven hundreds of couples who cannot conceive to turn to surrogates in Ukraine to have their children for them. Here, people can use surrogacy for $30,000 to $50,000.

The pregnancy is created using the father’s sperm and a donor egg: The baby’s DNA must match that of at least one of the parents.

The surrogate mother gets $15,000, plus $400 in monthly support during her pregnancy. The surrogacy agency or clinic takes the rest of the money.

During the COVID-19 quarantine, which began in mid-March, some 100 newborns were left in limbo, waiting with their surrogate mothers in a hotel in Kyiv for a chance to go home with their permanent families. While parents like the Straubs were trying to make their way across closed borders, other parents wound up stuck in Ukraine, unable to go back home.

On April 30, one of Ukraine’s surrogacy clinics published a video of 51 babies crying in a large room in the hotel to draw attention to the problem.

The Ukrainian Foreign Ministry was ignoring parents’ requests for entry, said Albert Tochilovskyi, the clinic’s owner. The Ukrainian human rights ombudswoman, Lyudmila Denisova, promised to speed up the process of entry for parents, asking them to send special requests to her and to cooperate closely with the embassies of their home countries.

Since the Ukrainian borders closed March 17, the embassy has facilitated the travel of seven U.S. families to be with their newborn children and helped four more U.S. families with eight newborns to get home, an embassy spokesperson told NBC News.

“We have been in regular communication with a number of American parents anxiously awaiting the birth of their children due to be born to surrogates in Ukraine, and we are closely monitoring the situation,” the spokesperson said.

And early on May 30, two dozen parents of children who had been stranded in the hotel arrived in Ukraine on a special flight from Argentina.

The Straubs said the U.S. embassy in Kyiv helped them a great deal. For them, this trip marked the beginning of their life as a family.

But for Yulia, it marked an end. Her journey began in September, when she was impregnated in vitro using an egg that had been fertilized by Straub’s sperm.

Indeed, many people shame surrogate mothers, saying they sell children for money. Different Ukrainian officials, including children’s ombudsman Mykola Kuleba, have publicly called for the procedure to be banned, calling it a “baby trade.”

Yulia said she did not view it that way.

“I can have children, but I can’t provide for them,” she said. “Those people have money, but they can’t have children. So I think we help each other.”

“It was really hard for me to involve another woman in this,” Darlene Straub said. “But my mom said I should see her as a friend for life.”

Then Yulia signed away her parental rights. On June 1, she got her money. The next day, she finally went home again.

The Straubs, however, must undergo two weeks of self-isolation in Kyiv before the government finalizes their documents and lets the family — composed of three people now, instead of two — go home to Texas.

Read 127 times
Tweet
Published in Blog
Tagged under
More in this category: « Why Frozen Embryo Transfers Are Overtaking Fresh Embryo Transfers In Ukrainian Surrogacy? Increased Delivery Rates And Reduced Risks! Fertility Treatment is Does Not Put Women at Risk of Ovarian Cancer – But it is Complicated »
back to top
Learn more
Book meeting