What Happens When Fertility Treatments & Religion Are Incompatible? 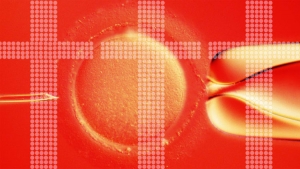 What Happens When Fertility Treatments & Religion Are Incompatible

A popular infertility shirt for sale on Etsy proclaims the mantra, "Faith, trust, and baby dust." And it's pretty spot-on — after all, whether you believe in him or capital H-i-m, one thing is universally true in the experience of infertility: You gotta have faith.

But what happens when your faith is the one thing standing between you and fulfilling your dreams of having a family? Minnesota-based mom Darcy Marsolek found out the hard way when her Catholic parish refused to baptize her son unless she confessed the "sin" of undergoing in-vitro fertilization. Marsolek didn't feel she had done anything wrong, so she approached some other Catholic churches in her area.

​​SML"Many priests told me no and were very mean about it — I even heard [the term] 'devil child,'" she recalls. "That was when they crossed the line."

Marsolek tried to reason with her own parish's priest again, but they were unable to reach a compromise. Instead, the baptism took place at a local Lutheran church, where they were welcomed with "open arms and smiling faces." She now has two sons after a collective four years of fertility treatments, and her family has decided not to return to the Catholic church.

"Anyone going through a hard time should not have to defend themselves, especially with the church," says Marsolek. "A church should have open arms, especially since it’s a baby that didn't do anything wrong. We only wished to have kids like others do naturally, but we couldn't. All in all, we were very saddened and disappointed to learn of the teachings of the Catholic Church."

Indeed, Catholicism takes a pretty strong stance against IVF. The church prohibits any type of conception that takes place outside of "marital union," which rules out the use of assisted reproductive technology. Another issue is cryopreservation of embryos, which presents numerous moral conundrums for Catholics. The church views embryos as human life, so discarding or donating "leftover" embryos is strictly forbidden. Even freezing embryos for future transfer is frowned upon since not all embryos survive the thaw.

Intrauterine insemination is more of a gray area since it allows conception to happen "naturally" inside the body (rather than in a petri dish as in IVF). In order to meet the criteria of performing the conjugal act, some Catholics have employed a workaround of using a perforated condom to collect the sperm sample.

However, the Vatican's Respect for Human Life section of its doctrine says, "Artificial insemination as a substitute for the conjugal act is prohibited by reason of the voluntarily achieved dissociation of the two meanings of the conjugal act." Translation? IUI still isn't approved since the sperm is inserted artificially, even though it was collected in accordance with the church's principles.

Most branches of Christianity are not as explicit as Catholicism with their stance, but many Christians still struggle with gaining acceptance and approval of fertility treatment. After all, only 33 percent of Americans think IVF is morally acceptable, according to a 2013 poll by Pew Research Center (46 percent believe it’s not a moral issue).

Tennessee-based mom Emily Holley is a practicing Southern Baptist who was told by a fellow congregant that "anyone who freezes embryos or does not use them is a murderer," but that didn't stop her from moving forward.

"I felt very strongly that my husband and I desired to create life, and I believe God is the ultimate giver of life," says Holley, who now has two daughters — one conceived through IVF and the other spontaneously — as well as two frozen embryos for future use. "I did not see a conflict."

Fellow Tennessee mom Alex McLean had the opposite experience. Raised a Pentecostal Christian and currently a member of a nondenominational church, McLean found her community to be largely supportive (save for a few insensitive comments). However, she felt the need to spend time in discernment based on her deep personal beliefs. "Initially, I said the farthest I was willing to go was IUI because IVF is both expensive and a [morally] gray area for me," says McLean.

After it became apparent that IVF would be necessary in order to conceive, McLean went forward with treatment, but ran into another ethical roadblock after sending her embryos for preimplantation genetic screening. Two of the embryos tested as chromosomally abnormal, and McLean made the "extremely difficult" decision to discard them.

"I tend toward believing that life [starts] at implantation rather than conception, but never really wanted to test that theory myself in decisions I made," shares McLean. "[After] the PGS results, I did a lot of research on what those abnormalities meant, and in the end, I felt that it was the right decision. But I felt a great deal of loss and a small theological crisis of beliefs about it."

Throughout the experience, McLean blogged about her journey and found solace in helping other women navigating infertility, which in turn helped her reconcile some of her own inner conflict. "Any time I post something to Facebook, I always get a message from someone who has questions about the process or who has recently gone through miscarriage or loss," she says. "It's turned into an unexpected ministry."

Marsolek has also been open about her experiences in hopes of helping others. "The priest said we could become Catholics again if we didn't advocate for IVF, but it was too late," she says. "I've told my story to many people in hopes that they too can have children."

Much like McLean and Marsolek, I have also felt called to share my experiences with infertility, and I'm grateful for the forum and opportunity to do so on SheKnows. But my own experience was nothing like Marsolek's. As a Catholic, I found our family's priest to be nothing but supportive and open-minded throughout the process — from when I was doing IVF to when my resulting twins got baptized. This disparity just reinforces the fact that infertility is a highly individual experience, from the many different diagnoses to the support and belief systems available for getting through them.

For Christians and Catholics struggling with whether to move forward with treatment, McLean suggests seeking clarity via online forums, in-person support groups and Bible studies. "Pray for peace and wisdom — IVF is not for everyone," says McLean. "Know your own spiritual beliefs prior to starting the process, and be careful of doing anything that would compromise this."

Kelly Avett*, a devout Christian who works at a nondenominational church and has a daughter through IVF, puts it simply: "[I believe in] a little bit of science and a whole lot of God. We did have family who accused us of 'getting ahead of God,' but my question to those who oppose was: 'If you had a brain tumor, would you want to pray about it or see a doctor?' I say both. Fertility [treatments are] there for medical assistance in what still requires God."

Read 617 times
Tweet
Published in Blog
More in this category: « There Are Funds Services For Parents, There Should be for Infertility, Too. Potential Problems with Hollywood Surrogacy And How Ukrainian Surrogacy Prevents Such Abuses »
back to top
Learn more
Book meeting