Fertility Treatments Are Becoming A Financial And Physical Risk For Many Americans: Ukraine is a Safe and Affordable Alternative 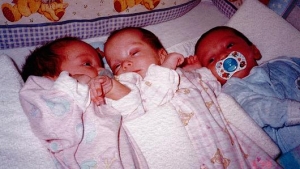 Ukrainian surrogacy is an affordable, safe alternative for many US couples wanting to have children. Doctors are only allowed by law to implant 2 embryos and selective reduction is allowed. Only 1% of children delivered in our maternity wards over the past 20 years have needed care after birth.

One cycle of in vitro fertilization costs $12,000 to $15,000.
Most Americans don't have insurance coverage for IVF.
Uninsured patients often choose to stack the odds, implanting multiple embryos per cycle in the hopes of achieving pregnancy. This results in high rates of twins and triplets.
These multiples end up costing the health care system.

In 1997, Debbie and Frank Astorino welcomed three children into the world, triplets Kevin, Kerri and Sheri.

The Astorinos had their babies thanks to in vitro fertilization, a medical procedure that they paid for out of pocket after spending nine years trying to get pregnant using other methods.
The procedure cost them $10,000 to $15,000. Even worse, Debbie's doctor said her chance of achieving pregnancy was only 25 percent. That's why Debbie chose to stack the odds.

"This was a one-shot deal for us," Debbie said. "I remember crying and begging the doctor to put in four embryos, and him refusing and insisting on putting in three. He told us four was risky for the babies and my health, but what he didn't understand was this was our only chance. We couldn't afford another cycle."

Three embryos turned out to be more than enough.

"I'm grateful that he didn't put in four. Because the babies did have tremendous health issues," Debbie said.
The triplets were born prematurely and had low birth weights, both common complications of multiple births. They spent eight weeks in neonatal intensive care before being sent home with 24/7 nursing care.
Taking care of the triplets' medical needs was expensive. Frank estimates he and Debbie submitted over $1 million in medical bills after the babies were born.
"Insurance covered most of the aftermath but not the preplanning," he said.
Two decades later, not much has changed. IVF remains expensive and, according to a 2015 study, the odds of a successful pregnancy after one cycle of IVF stand at just 29 percent.
Financial incentives still affect IVF practices, leading to high rates of multiple births and hefty medical bills.

A lack of insurance coverage

Roughly 1 in 8 couples, or 12 percent of married women, have trouble getting pregnant or sustaining a pregnancy. This statistic has grown over the years, in large part due to the increasing age of prospective mothers. As couples wait longer to have children, more are turning to IVF for help once they're ready. Today, about 1 in 60 newborns was conceived by in vitro fertilization.
But even as demand for IVF rises, insurance coverage remains limited. A 2017 study by Mercer, a health-care consulting group, found that only 26 percent of companies with over 500 employees cover the procedure. The result is that many Americans are left paying fully out of pocket.
For Marisa and Brad Hillman of Oxford, Connecticut, four cycles of IVF ended up setting the couple back over $40,000. They took out a home equity loan and later moved in with Marisa's parents to save money.
Financial pressures lead to multiples

Patients like the Hillmans who pay for IVF on their own often end up weighing the price of doing a single-embryo transfer multiple times or a multiple-embryo transfer once.
That's why, for their third cycle of IVF using frozen embryos, the Hillmans asked their doctor to implant three.
"We had six frozen embryos. And if we put in one at a time, that's $2,000 each time. Or we can put in three, and it's still $2,000. The number of embryos you put in doesn't change the cost."
Their doctor refused and put in two. Marisa is now pregnant with twin girls due in December.

The Hillmans' story is not unique.

"If you've saved up $10,000 or $15,000, or maybe you borrowed against a 401(k) or borrowed from friends and family, maybe you're feeling like that is your only chance, that one IVF cycle. That creates a lot of risk," said Barbara Collura, president of Resolve, an infertility advocacy association.
Today, nearly 40 percent of infants born from IVF are multiples.
Multiples are dangerous and expensive

The risks to mothers carrying multiples and the infants are substantial. Dr. Dmitry Kissin of the U.S. Centers for Disease Control and Prevention says the risks to mothers include high blood pressure, gestational diabetes and a higher rate of cesarean sections. The risks to infants include low birth weight, prematurity and sometimes long-term disabilities like autism and cerebral palsy.
"The chance of dying during pregnancy for mothers after IVF is three times higher if they carry multiples compared to mothers who carry singleton babies," Kissin said. "And for children, the chance of death during the first month of life is six times higher for twins and 14 times higher for triplets."
No one knows the risks better than Debbie Astorino. "It sounds all well and good when people see that I have triplets. But unfortunately, no one had it easy. The ride was bumpy," she said.
Debbie suffered from gestational diabetes and dangerously high blood pressure. She was put on hospital bed rest after 23 weeks gestation. The triplets were born weighing 2.8 to 3.9 pounds. ​​SMXLL

Those sorts of medical complications are expensive.
"It turns out that paying for infertility care and controlling the number of embryos that are transferred would actually save money for the overall cost of medical care in the United States," said Dr. Richard Paulson, president of the American Society for Reproductive Medicine.
"The problem is getting over the initial energy that has to be expended to make it happen."
There's research backing up his claim.
As early as 1998, Swedish researchers concluded that one-embryo transfers were more cost-effective than two embryo transfers when accounting for the costs associated with multiple gestations.
A case for single-embryo transfers

In mid-2010, Quebec's universal health insurance began covering all in vitro fertilization costs, with a caveat. The policy requires its patients to undergo single-embryo transfers.
The result in Quebec is that multiple births declined and the cost per live birth decreased.
Dr. Bradley Van Voorhis, director of the IVF Program at the University of Iowa Carver College of Medicine, says U.S. insurance companies may be picking up on this trend.
"It's going to become a growing trend across the country as insurance companies understand that when they're covering IVF, the greatest expense they have is paying for extremely premature infants," he said. "So more and more insurance companies are really demanding that single embryo transfers be done in good-prognosis patients if they're going to cover this treatment."
But others say there isn't enough data available yet to persuade employers to cover IVF from a financial standpoint.
"It's clear there's definitely an offset. But whether this offset is 100 percent of what the employer is spending, we just don't know," said David Kaplan, a senior partner in Mercer's Health business. "It also depends greatly on the structure of the employers' benefit and many other factors."
What's next for infertility coverage?

This year, the infertility community celebrated what they say is long overdue news; infertility was officially declared a disease by the American Medical Association. Many hope this will be the catalyst that helps expand insurance coverage.
In the meantime, Resolve's Collura says there's a need to educate employers on the benefits of providing infertility coverage for employees.
"We as a field haven't done enough to equip these companies with data and information on this field, on benefit design for IVF, and on what employees really need and want," she said. "When we see the financial concern removed from this medical decision, people actually make better medical decisions; they have better, healthier outcomes."
Proponents of increased insurance coverage say that policy would help eliminate financial concerns from a critical medical decision, potentially reducing the high rate of multiple births.
And, they say, it might just end up saving patients, employers, and the entire health-care system money in the long run.

Would you like to learn more? Please contact us to share your challenges, ask questions and discuss solutions. This email address is being protected from spambots. You need JavaScript enabled to view it., www.Delivering-Dreams.com and www.international-surrogacy.com, 1.908.386.3864.

Read 648 times
Tweet
Published in Blog
More in this category: « 28 Celebrities That Have Used Gestational Surrogates - Ukrainian Surragacy Makes Surroggacy Affordable For All 'You know what you're missing': The pain of secondary infertility: Another Reason for Ukrainian Surrogacy »
back to top
Learn more
Book meeting