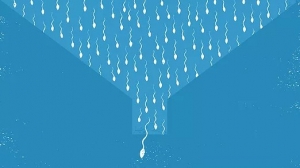 Sperm counts appear to be plummeting throughout the Western world, according to a large study of men around the world.

An international team of scientists analyzed data from nearly 43,000 men in dozens of industrialized countries and found that sperm counts dropped by more than half over nearly four decades.

"I think that we should take this very seriously," says Shanna Swan, a reproductive epidemiologist at the Icahn School of Medicine at Mount Sinai in New York. She helped conduct the study published in the journal Human Reproduction Update. "I think it's a wake-up call," Swan says.

Previous studies have suggested that sperm counts may be falling around the world. This study is the largest and most comprehensive to date. It was designed to resolve doubts about the earlier findings, Swan says.

Even at the reduced sperm counts, infertility has not become a widespread problem. At the most, the lower levels of sperm may make it harder for some couples to conceive, Pacey says.

But there's no sign the decline is slowing, which means that male infertility could become a more common problem in the future.

"Since this is the best study that's ever been done, it is concerning that it suggests such a progressive and dramatic decrease in sperm counts over time," says Peter Schlegel, a professor and chairman of urology at Weill Cornell Medicine in New York. Schlegel serves as vice president of the American Society for Reproductive Medicine.

Schlegel stresses, however, that more research is needed to confirm the findings and try to determine possible causes.

"Since we don't know what could be causing it, it's worrisome," Schlegel says.

Swan and her colleagues combed the scientific literature for studies that had examined sperm counts and concentrations and screened more than 7,000 studies, excluding those that had shortcomings or flaws. The researchers then analyzed data collected by 185 studies of 42,935 men who provided semen samples between 1973 and 2011 in North America, Europe, Australia and New Zealand.

One of the ways the researchers tried to alleviate concerns about previous studies was to include men who weren't just being tested at fertility clinics because they might be infertile. They included sperm counts from other men — soldiers and college students, for example.

"I think these are extremely concerning findings," Swan says.

And Swan says it's not just the concern about fertility. A decreased sperm count has been linked to an increased risk for premature death, Swan says. So it may be a marker for other health problems, she says.

While no one knows why sperm counts and concentrations may be falling, there are a variety of theories.

Swan suspects that one factor may be exposure to chemicals while in the womb, which could harm the normal development of males' reproductive systems.

"The mother's exposure to a number of chemicals can alter the reproductive tract of baby boys significantly," she says.

But Pacey questions that theory and worries about alarming pregnant women unnecessarily.

"There's a real danger here that researchers publish papers like this, that are then reported irresponsibly, that then lead to people getting really paranoid about what may or may not be happening," Pacey says.

The problems many couples encounter when they attempt to get pregnant could be avoided if they started trying just a few years earlier, Pacey says.

Swan acknowledges that other factors could be playing a role. The global obesity epidemic could be cutting sperms counts, for example.

"There's also stress, which is related to sperm count," she says. "So there are a number of factors which you could cluster under the heading of 'modern living' that could be playing a role in what we're seeing."

There wasn't enough data from non-Western countries to reach any conclusions about whether sperm counts are falling there, too, Swan says.

Read 499 times
Tweet
Published in Blog
More in this category: « Surrogacy Acronyms Explained Surrogacy and Kim Kardashian »
back to top