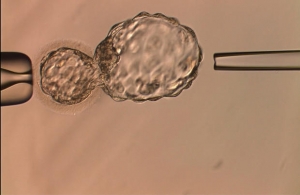 New technology now being offered in New Zealand could improve the chance of women in their late 30s getting pregnant using IVF by up to 25 per cent, a new study has shown.

The results of a study into pre-implantation genetic screening using next generation sequencing were presented to the American Society of Reproductive Medicine conference in Texas yesterday and showed an improved pregnancy rate of between a third and a half.

Of the 267 women in the trial aged between 35 and 40 years old who had a single embryo implanted, 50.8 per cent of those who used the technology were still pregnant at 20 weeks compared to 37.2 per cent of those in the control group.

The miscarriage rate was also decreased by about 25 per cent using the technology, from 11 per cent in the control group to 8.2 per cent of those who were screened.

ReproMed was the first clinic in the country to use next generation screening technology, according to director Guy Gudex. Initially samples were sent to a laboratory in Australia but since the beginning of the year tests have been carried out in Auckland with the help of Auckland University's Genomic Centre.

Fertility Plus also offer the test using the new technology but still send samples to Australia for analysis, he said.

Other New Zealand facilities offered older forms of pre-implantation genetic screening which were between 90 and 95 per cent accurate but next generation sequencing increased the accuracy to about 95 per cent, Gudex said.

Fertility Associates has offered pre-implantation screening using an older method for some time but scientific director Dr Dean Morbeck said there was enough evidence that the next generation technology provided so much more information that the clinic was switching to the new technology next year.

Gudex said the results from the new study were hugely important because it was the first randomised controlled study with a large sample size which used next generation sequencing and modern biopsy techniques.

He said the average age of women being treated using IVF was now about 36 or 37 so the study was hugely important for fertility clinics.

"It's been pretty clearly proven in this study that if you're in that age group and you use genetic screening of your embryos to basically pick the healthy ones, pick the best one, it definitely improves your chance of getting pregnant."

Each year in New Zealand there are about 5000 first-time fertility clinic appointments and close to 6000 Assisted Reproductive Technology treatment cycles.

Gudex also said the screening helped speed up the process because picking the healthy embryos usually meant fewer rounds of IVF were needed before becoming pregnant and there was less chance of a miscarriage.

"The reason why that's important is that you can imagine going through IVF treatment having repeated embryo transfers to get pregnant and to have a miscarriage is just devastating, it's even worse. Although miscarriage is still possible, it's significantly less likely."

One patient, who agreed to share her story anonymously, had five miscarriages before she and her partner decided to try IVF.

They were offered the chance to have pre-implantation genetic screening with next generation sequencing and jumped at the idea because they were desperate to avoid more heartbreak.

"The IVF process resulted in three embryos, with the test results showing that two of the embryos were healthy and one had abnormal chromosomes, so we were relieved we had the testing done," she said.

The test allowed the couple to have certainty that there was nothing wrong with the embryo before it was implanted.

"I think it's the most amazing thing. It gives you that peace of mind that they have already checked all the chromosomes are right. At least you know going in that everything's okay."

She had the first embryo implanted and is now 31 weeks pregnant with a healthy baby. She has had her other healthy egg frozen ready for baby number two at a later date.

Gudex said the clinic was seeing similar results to the study in the women they treated using the new generation screening.

Since setting up the laboratory in Auckland the clinic had treated about 15 to 20 women with the first baby expected in early January.

Learn more about Ukrainian and international surrogacy:
Delivering Dreams International Surrogacy Agency helps couples throughout the US struggling with infertility have children. Located in the state of New Jersey and Kyiv, Ukraine, our amazing medical facilities and professionals, surrogates and donors are in Ukraine, because Ukrainian law protects the rights of parents and their children from inception at affordable costs and high success rates.

Read 764 times
Tweet
Published in Blog
More in this category: « The Prognosis for male Infertility isn’t getting better. Is Artificial Sperm the Answer? U.S. Fertility Rate Fell to a Record Low, for a Second Straight Year »
back to top
Learn more
Book meeting