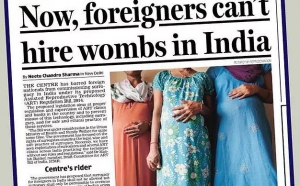 Ukraine is One of the Few Low Cost Surrogacy

KATHMANDU, Nepal — The embryos belonged somewhere, but probably not in this empty fertility clinic in the capital of Nepal.

For months, they had sat suspended in a tank of liquid nitrogen at the fertility center at the Grande City Clinic and Hospital, which until recently operated a robust surrogacy business that attracted would-be parents from around the world. But the embryos are now stuck in limbo after Nepal abruptly banned surrogacy in September.

“We’ve gotten to the point now where it’s shut down and we don’t know where to go,” said Kain Rafferty, a data services officer from Melbourne, Australia, who has embryos stored in the clinic.

Surrogacy may be the only way for some couples to have biological children by implanting an embryo into a woman who carries the child for them. But many cannot afford the process in developed countries like the United States or Canada and have looked for cheaper options in less-regulated countries like Nepal, India and Thailand. Now, one by one, these nations have shut their doors amid concerns over exploitation of the surrogates, oversight and safety, leaving people of less means without many choices.

“When you look at the global map currently,” said Doron Mamet, a co-chief executive officer of Tammuz, a surrogacy agency based in Israel, “there are only a few options that are open.”

The United States regulates surrogacy on a state-by-state basis, and some states are friendlier than others. California’s laws are among the most permissive, while surrogacy contracts are unenforceable in states like Michigan.

The process is allowed in a patchwork of other countries, to varying degrees. Canada, like many places, forbids commercial surrogacy, meaning that pregnant women may be reimbursed only for their expenses. Ukraine is one of the few low-cost surrogacy options available to foreigners, but not to same-sex couples like Mr. Rafferty and his partner, who used an egg donor to create their embryos.

Israel bans same-sex couples from using a surrogate, and many heterosexual couples consider the process too onerous and expensive. Some couples, like Oshri and Anat Gez, have looked outside the country for easier and less costly options.

The Gezes said they came to Nepal after a decade of trying to have a child and four failed attempts with surrogates in India.

They had wanted two children, and were expecting twins through a surrogate in Kathmandu when Nepal imposed its ban. Their leftover embryos would have been expensive to store, especially in a country where they could no longer be used, Mr. Gez said.

But the twins were born prematurely, the Gezes said, and one did not survive. The Gezes brought home only one child.

But by then the couple had already decided to destroy the leftover embryos. Now, the couple must figure out where they can start the process again.