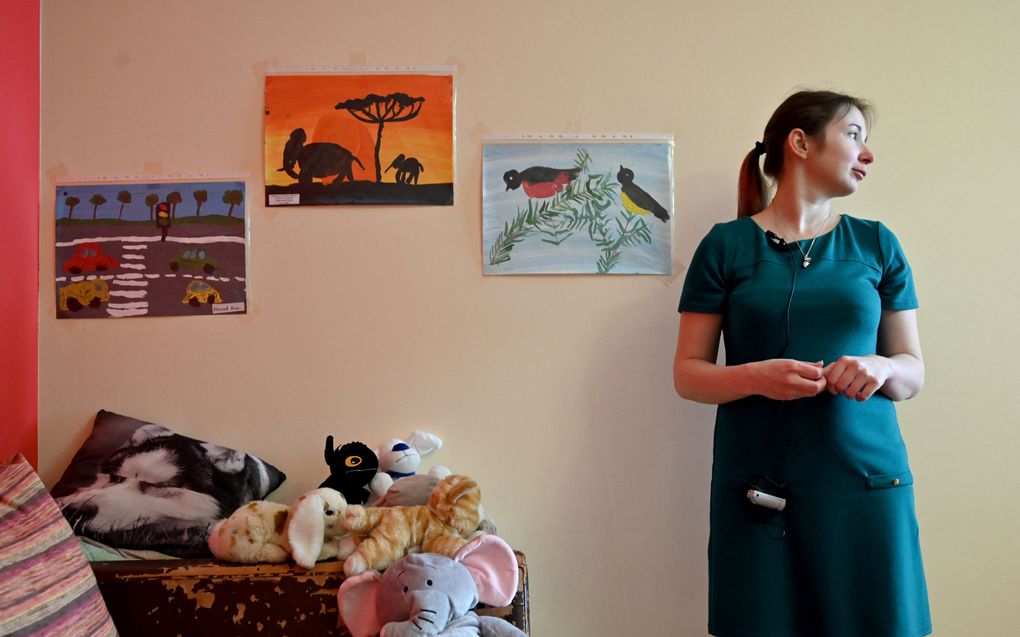 In this photograph taken on June 4, 2020, Olga Korsunova, a 27-year-old going through her fourth surrogate pregnancy, poses in her rental flat in Kiev. Photo AFP, Sergei Supinsky

In the midst of the war in Ukraine, the country’s surrogate mothers are in a dilemma between legal contracts and family. Meanwhile, would-be parents are desperately trying to get updates on their child.

If they flee their home country, they end up in a situation in which they cannot give the baby over to the would-be parents. All countries in the region (with Georgia as exception) would see that as child trafficking. Staying in Ukraine would not be an option either. The would-be parents would not be able to pick the child up there.

Internationally, Ukraine is known as one of the most popular choices for surrogacy. However, as the American news website Quartz reports, fertility clinics are now fielding a barrage of calls from would-be parents outside Ukraine who are desperate for updates on their surrogate mothers.

In anticipation of a Russian attack, some facilities had already taken measures for the safety of the Ukrainian women, transporting them towards more western regions of the country. BioTexCom, one of the leading womb-for-hire companies in the country, even built a bomb shelter. The Kyiv-based company posted a video on the eve of the invasion, showing a shelter equipped with gas masks, sleeping bags, canned food, and cribs. According to the organisations, the bunker can accommodate 200 people.

However, the war changed everything. It raises ethical and legal questions. Should a surrogate mother be put away somewhere safe to protect the child she’s growing for someone else? Or should she be with her own family, in her hometown? Or even out on the streets defending her nation?

In an article in American magazine The Atlantic, the contracts of these surrogate mothers are described. “Parents may want a surrogate to abstain from certain foods, such as coffee, or certain activities, such as kickboxing.” The writer claims to have seen contracts with North American surrogates “saying no to hair dye, perfume, dentistry, and even sex. Other times parents try to restrict a woman’s movements: no moving abroad, for instance, or no travelling more than 100 miles from home.”

The contracts caused Ukrainian surrogate mothers to worry about their future. According to the British newspaper The Times, a pregnant surrogate mother in Ukraine asked a lawyer before the invasion whether the biological parents of the unborn child would be able to force her out of the country.

However, the Ukrainian woman was not planning on abandoning her own children. Meanwhile, the client couple wanted her to go to Georgia for the rest of her pregnancy to reach her without any problems.

Susan Kersch-Kibler, the surrogacy agency ‘Delivering Dreams’ founder, decided to move her surrogates west to Lviv before the war began. However, the women she communicated with were not happy to go. Kersch-Kibler says so in The Atlantic. “A few days after the move, two of the women told me via WhatsApp that they missed their kids. “I hope we go back to Kyiv as soon as possible,” one said.”

After the war broke out, Kersch-Kibler tried to move more surrogates to safety. Some of them did not want to move. “They wanted to make their own decisions about where and how they might survive the next days and months.”

The German news website Stern reports the story from the other side: that of a German couple. Matthias and Julia arrived in Kyiv shortly before the war to be there when their son would be born. When war broke out, their surrogate mother Polina was heavily pregnant, but their son was not yet born. After a few days of hiding in their apartment, they got a Telegram message from Polina, who congratulated them on their parenthood. Whether the new parents have reached their home in Germany yet, is not known.

Several other parents, however, are stranded in Kyiv. This reports the Italian newspaper La Repubblica. Among them are Italian couples. “I have ten couples with as many newborns”, said lawyer Giorgio Muccio on Thursday. Muccio assists one of the families in the embassy. “At the beginning, there were problems with the documents. Then, given the worsening of the situation, these were overcome in the child's interest. The two parents were welcomed in the diplomatic headquarters and are currently trying to repatriate.”

While BioTexCom urges parents-to-be to keep calm, they also acknowledge that they should not try to get surrogate mothers out of the country. In a Facebook post, the German part of the company warns that surrogate babies born outside Ukraine cause legal problems. “The surrogate mother will be considered the mother, and attempting to deliver the child is called child trafficking; you will never be recognised as the child’s parents.”

For American would-be parents, surrogacy in Ukraine is cheaper than in their home country. In Ukraine, it costs between $30,000 and $50,000, while in the US, it is more than $100,000. This reports India Today. There are certain conditions that would-be parents must follow – they must be heterosexual, married and provide a medical reason for opting for surrogacy.

It is not the first time there have been concerns about surrogacy in Ukraine. Earlier, in the height of the pandemic in 2020, travel restrictions caused a baby pile-up in the eastern European country. Until 2015, wealthy couples pursuing surrogacy had a glut of clinics to choose from in Thailand, Nepal or India. But as allegations of exploitation mounted, they closed their doors to foreigners one by one. Business in Ukraine and Georgia –some of the few places in the world that still allow commercial surrogacy for foreign nationals– has been booming ever since.

The ‘baby industry’ is still controversial in Ukraine. At the beginning of February, the Council of Churches in Ukraine criticised the surrogacy activities. The Ukrainian news website Religion reports that the Archpriest of the Ukrainian Greek Catholic Church, Oleksa Petrov, stressed that the parliament should seriously consider whether it is expedient to cover this, according to him, immoral, shameful activity, which is essentially trafficking in Ukrainian children and sexual exploitation of women.

Read 329 times
Tweet
Published in Blog
More in this category: « Crisis in Ukraine creates fears for Canadian parents using Ukrainian surrogates How can we possibly continue to ensure safety and provide world-class medical treatment and facilities during the war? »
back to top
Learn more
Book meeting