The War in Ukraine Is a Reproductive Health Crisis for Millions

Russia's invasion is making it harder to deliver babies and provide birth control, abortion services, and other essential care.

THE WAR IN Ukraine is becoming a crisis of reproductive health. Over the next three months, more than 80,000 Ukrainian people are expected to give birth, according to the United Nations Population Fund (UNFPA). That’s about 1,000 deliveries per week. The World Health Organization (WHO) estimates that 15 percent of pregnancies—in a war zone or not—will require skilled medical care for a potentially life-threatening complication.

Women have already given birth in underground shelters and in subway stations. UNFPA posted a woman’s firsthand account of delivering a baby in Kyiv on the first day of the conflict. “I was lucky,” she wrote, “it did not happen in the basement.” 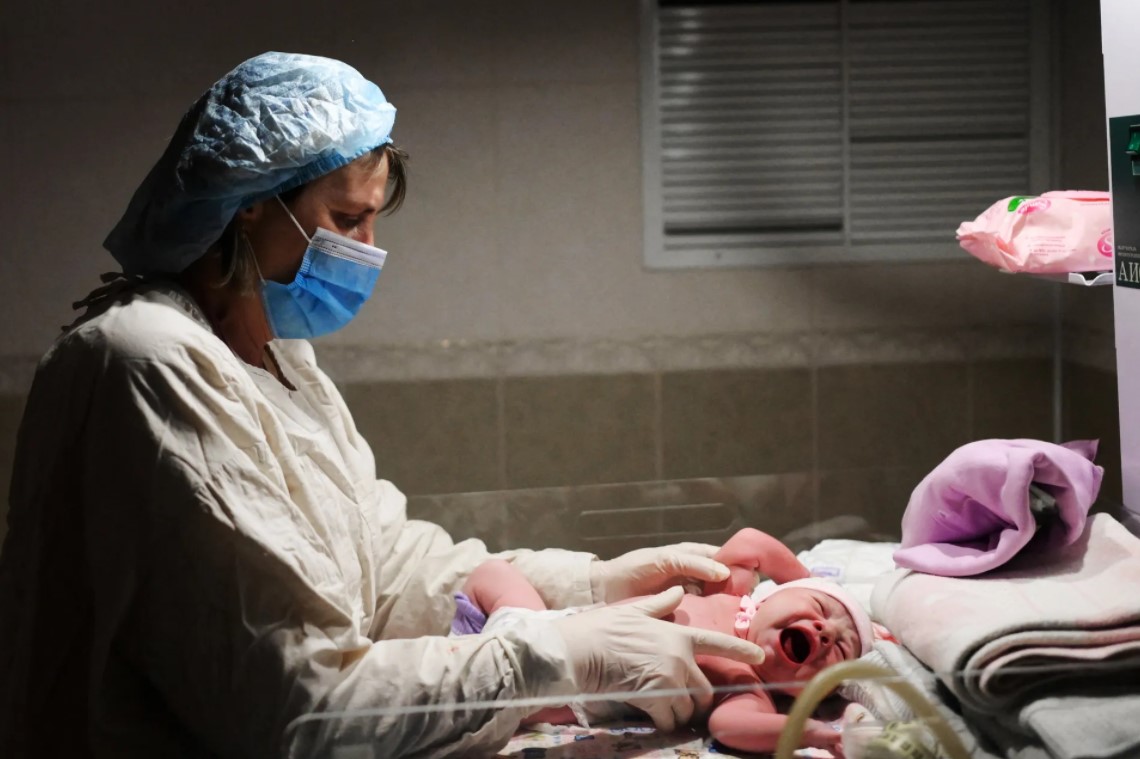 “Babies don't wait because there's a war. Periods don't stop because there's a war,” says Caroline Hickson, the European regional director for International Planned Parenthood Federation (IPPF). Experts are raising concerns about both the short- and long-term tolls of neglecting sexual and reproductive care in Ukraine, including surrogacy and abortion services, disease prevention, and help for survivors of sexual assault. “More than 50 percent of the population are women. And these are non-negotiable needs,” Hickson says.

And yet people are running out of options for safe places to seek care. More than 3 million Ukrainians have fled the country, and others have sought refuge in cities less affected by Russian attacks. The war has strained food, power, and water supplies and cut people off from emergency and routine medical care. According to an online tracker maintained by the WHO, as of Tuesday, attacks had affected 34 health care facilities in Ukraine since the invasion began. These include a maternity and children’s hospital in Mariupol that was destroyed last week in an air attack, an action the US condemned as “barbaric.” (A pregnant woman and her baby died following the attack.)

“Sexual and reproductive health services should be at the core of our assistance to both women refugees crossing the borders and also women staying behind,” Isabel Yordi Aguirre, technical officer of gender and health for the WHO, told WIRED during a press briefing last week. Ukraine’s rate of maternal mortality, or when a mother dies from a pregnancy-related cause, has historically been high, due in part to insufficient access to family planning services. Aguirre notes that conflict and displacement threaten to increase that mortality rate. “Those women may have moved from having a life-changing experience to a life-threatening experience,” she says.

GALYNA MAISTRUK SAW this coming. Maistruk is a gynecologist-oncologist from Kyiv who also directs Women’s Health & Family Planning for Ukraine. Maistruk has helped fill gaps in humanitarian aid for reproductive health care in eastern Ukraine since the Russian invasion of Crimea eight years ago. She had helped supply equipment to Mariupol’s maternity and children’s hospital—the one destroyed last week.

It’s been clear to her that the conflict would inevitably expand. Still, when it finally did approach Kyiv, she couldn’t avoid the shock. “I understood that it would be very bloody,” she says. “Because I saw this Russian world in Donetsk and Luhansk—how it looks, how people are suffering.”

Medication is now hard, if not impossible, to access because supplies have been depleted or destroyed and logistical chains broken, says Maistruk. Terminals and storage are generally located near Kyiv, Ukraine’s most populous city. “Now everything is in very poor condition. Unfortunately many companies lost the possibility to transport,” she says. Some health care workers have fled for safety, including Maistruk, who recently left Kyiv to go west. Her husband stayed behind to continue work in a maternity hospital. Emergency supplies are short: oxygen, blood, antibiotics, antiseptics—all of which can be ​​critical ​in emergency obstetrics.

And a family’s needs don’t stop once the baby is safely born. “The women stay in their clinics for two, three days and then they need to go home,” says Maistruk. “And home is under bombing. Home is under air alarms, when you need to leave everything and in one minute go to the shelter. Imagine: How can you breastfeed—how can you organize your care?”

Global health infrastructure had already been pushed to its limits by the pandemic, says Ann Moore, a researcher with the Guttmacher Institute, a New York-based research and policy organization for sexual and reproductive health and rights. “This humanitarian crisis is starting with depleted resources,” she says. “Health care provider resources, commodity shortages—a weakened health infrastructure overall, globally. That puts all of these reproductive health care needs at even greater risk.”

A rush of humanitarian aid has streamed into Ukraine and bordering countries to help fill this gap. The UNFPA has delivered essential supplies and has made sexual and reproductive health a priority. Médecins Sans Frontières (Doctors Without Borders) has done the same and begun training health care workers in the west on war zone trauma care. Unicef has provided 62 metric tons of supplies, including midwifery kits. The UNFPA also deploys packages of equipment meant to help with normal deliveries, complicated ones, and C-sections. (Maistruk remembers these kits as “excellent” when she previously used them in Luhansk. “It includes the whole operation room,” she recalls. “You can open the box, and in one, two hours you can organize the operation room.”)

Unicef supplies dignity kits containing underwear, soap, a bucket, and other hygiene products, plus basics for safety: a flashlight, a whistle, and information about gender-based violence. “We know that when social norms break down, sexual violence—especially among the most vulnerable—always follows,” says Moore, pointing out that young women and girls, people of color, and the LGBTQ+ and disability communities are always at the most risk. Survivors may have injuries that require immediate medical attention and treatments: antibiotics, post-exposure HIV prophylaxis, and emergency contraception.

People will still need access to routine medications, too, like hormonal birth control. “If people can’t access contraception, they may be confronted with unintended pregnancies at a point which is just perhaps the very worst time in one's life to have to manage that,” says Hickson. “If you are a person with HIV and you're taking antiretroviral therapy and it suddenly stops, that's going to be massively detrimental. There are transgender people who are taking hormone therapy, that's massively detrimental if they no longer have access.”

The Inter-Agency Working Group on Reproductive Health in Crises (IAWG), identifies these on its list of priority services for humanitarian aid, which includes safe abortion and post-abortion care. All of these may be in demand among Ukrainians. Some people may have been separated from their partner, as Ukraine banned men ages 18 to 60 from leaving. Pregnancies that were previously desired may no longer feel sustainable.

Still, these medical needs are among the last to receive attention during crises, says Sara Casey, a public health and humanitarian aid expert at Columbia University. “There are no excuses for this. None of these services are highly complicated to provide,” she says, including providing abortion via pills, typically a combination of misoprostol and mifepristone.

But such services can also be politically fraught. Ukraine has liberal abortion policies. Some of its neighbors, countries into which people are fleeing, do not. Poland has a near-total ban on abortion. It is only permissible there in the case of rape, incest, or threat to a mother’s health. (Poles have been known to travel to Ukraine for abortions.) “And that ban will apply equally to a Ukrainian refugee woman as it would to a Polish woman,” says Hickson. “That is a huge challenge.”

Post-abortion care—to prevent problems like sepsis—is less controversial, says Casey. “Essentially, no country is going to say the person should die, even if they think abortion itself is wrong.”

Ukraine has one of the largest networks of surrogacy in the world; an estimated 2,000 children are born to surrogate mothers there every year. Agencies have raced to ensure the safety of those women. Susan Kersch-Kibler, founder of Delivering Dreams Surrogacy Agency, says her agency took seriously the early reports that Russia might invade, and managed to relocate all but one surrogate mother to the western city of Lviv weeks before the war began. She says personnel risked their lives to rescue biological material from Kyiv, such as eggs, sperm, and embryos. “These are people that are older, and sometimes have gone through tons and tons of IVF. So the embryos we have are extremely precious,” she says.

But despite the peril, there is some room for hope. Aid has gotten better and smarter, Casey notes, thanks in part to advocacy groups that have fought for years to make policymakers and NGOs focus on reproductive health. In the 1990s, during the crisis in Bosnia, she says, services for sexual assault were so bad that humanitarian organizations “would set up places with signs that said, like, ‘rape center’ and then wonder why nobody came to them.” But the response was much better in 2016 in the Rohingya refugee camps in Bangladesh, she says, noting that aid organizations rallied resources to provide access to safe abortion. "I would say that's probably the first major humanitarian emergency where I felt like safe abortion care really was available in the camps fairly quickly after arrival," she says.

The job of these aid groups, Hickson says, is now to support Ukrainian health care workers who already know their communities well. “They are there even when the bombs are falling,” says Hickson. “Doctors and nurses working in incredibly tough situations to deliver babies and care for people, no matter what.”

More in this category: « New York Times: ‘It’s a Terrible Thing When a Grown Person Does Not Belong to Herself’ How Russia’s invasion is affecting Ukraine’s surrogacy industry, leaving intended families ‘desperate for assistance’ »
back to top
Learn more
Book meeting