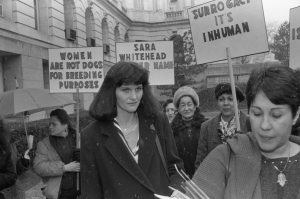 Introduction: Surrogacy has had a bumpy road in the US. When Ukraine became independent, the laws, nearly has they are today were enacted. Surrogacy has been regulated and the legislation has remained consistent for more than 25 years.

Kim Kardashian West and Kanye West have announced that their third child, a daughter, was born on Monday via surrogate. “We are incredibly grateful to our surrogate who made our dreams come true with the greatest gift one could give,” Kardashian West said in a blog post sharing the news.

They are the latest celebrity couple to raise awareness about this method of having a child, in which a third party carries the pregnancy on behalf of the parents. It’s an idea with extremely old origins — as TIME has noted previously, the Old Testament story of Abraham and Hagar conceiving a child with his wife Sarah’s blessing is essentially a story of surrogacy — but it has only become more widely known and debated in the United States in the last three decades, thanks in large part to a controversial and headline-grabbing case that got the nation talking about the subject.

Here’s what happened: In 1985, a biochemist named Bill Stern and his pediatrician wife Elizabeth Stern, faced with the fact that Elizabeth’s multiple sclerosis would prevent her from carrying a pregnancy, hired a woman named Mary Beth Whitehead to bear a child fathered by Bill Stern via artificial insemination. (Kardashian West reportedly also chose surrogacy because of health concerns.) As TIME explained to readers as the case developed, Whitehead had come forward to be a surrogate out of a desire to help a couple facing infertility, and underwent testing and counseling before being matched with the Sterns, who agreed to pay her $10,000 along with other fees and payment to the clinic that arranged the surrogacy. When the baby was born, he or she would be the Sterns’ child.

But when the time came, it became clear that things were not quite so straightforward. Because laws about surrogacy at the time were not well developed, the rights of those involved were unclear.

“Whitehead began to have misgivings about handing over the girl she named Sara Elizabeth and the Sterns named Melissa Elizabeth,” TIME reported. “She refused the agreed-upon payment from the Sterns, so the money was put in an escrow account. A few days later the Sterns agreed to let Whitehead keep the baby for a short time. When the child was not returned after several weeks, the tug-of-war began.”

Whitehead and her husband eventually fled with the baby — known as “Baby M” — to Florida, where they were located months later by police so the baby could be returned to the Sterns. (Whitehead was granted visitation rights while the case was being decided.)

Surrogate mother Mary Beth Whitehead joins a group of women demonstrating on her behalf outside Bergen County courthouse on March 12, 1987, after the lawyers in the "Baby M" custody case delivered their summations. Bettmann—Getty Images

At issue was more than a fight between two families. As TIME summed up the decision a judge would have to make four months later, “He could treat the case mainly as a contract dispute, rule that the contract is valid and award the child to the Sterns. Or he could opt to treat it basically as a custody battle; then the best interests of the child would be the guiding principle.” The ethical questions would be harder for one judge to decide, as the story explained:

Has [society] imperiled its most venerable notions of kinship and the bond between mother and child? Has it opened the way to a dismal baby industry, in which well-to-do couples rent out the wombs of less affluent women, sometimes just to spare themselves the inconvenience of pregnancy? Yet if surrogacy is prohibited, has a promising way for childless couples to have families been denied them? And what if the truest answer to those questions is also the most problematical — yes to all the above?

In February 1988, the New Jersey Supreme Court ended up granting the Sterns custody, with Whitehead getting visitation rights that were expanded over time. But at the same time the justices voided the 1985 contract in which the Sterns agreed to pay Whitehead $10,000, concluding that paying women to be surrogate mothers was ”illegal, perhaps criminal, and potentially degrading to women.” As Chief Justice Robert Wilentz wrote: ”There are, in a civilized society, some things that money cannot buy.”

The fact that it happened in New Jersey, with New York City’s media hub so close by, is a big reason why this case got so much attention, argues Susan Markens, author of Surrogate Motherhood and the Politics of Reproduction and professor of Sociology at Lehman College. But the moment in time mattered as well.

“It’s after the women’s movement, a period of changing gender norms,” she explains, which meant changing conceptions of how to be a mother as well as “more awareness of a perceived sense of increased infertility.” Part of that had to do with the growing number of women joining the labor force and putting off having kids until later in life, when they might have greater difficulties with infertility. As a result, more people were wondering about alternative options.

In the years since, the concept — paid and unpaid alike — has become more accepted. In addition, in vitro fertilization also started to take off around then, with the first IVF baby born in 1978, Markens notes, which made surrogacy easier in some ways. As TIME reported in 2015, while the New York State Assembly considered legalizing paid surrogacy, “Experts now recommend gestational surrogacy, where a surrogate fetus is implanted with an embryo made from donor sperm and egg — as opposed to traditional surrogacy, where the surrogate is inseminated with sperm. In the latter case, the carrier is genetically related to the child.”

After “Baby M,” New Jersey banned paid surrogacy. It remains one of just a handful of states that ban it, while nearly two dozen states are thought to allow the practice. Across the board, even if paid surrogacy practice is not illegal, the laws are still unclear and vary on exactly who is protected. And in some cases, the contracts that surrogate mothers sign with the baby’s parents “may not be legally binding,” as one Pew Charitable Trusts article notes.

So Markens explains, in terms of meaningful laws, not too much has changed. After all, despite greater awareness, many of the deeper questions that floated around Baby M still persist. As Markens puts it, “There’s no social cultural consensus on the issue, so it’s hard to get anything passed.”

But, with the West family welcoming one of the new most famous faces of surrogacy, awareness of the option is only bound to increase.

For the best service, medical facilities and affordable surrogacy with strong legal protections for the intended parents from inception, contact us at Delivering Dreams. Learn if we can help you grow your family through Ukrainian Surrogacy. 908-386-3864 This email address is being protected from spambots. You need JavaScript enabled to view it., international-surrogacy.com.

Read 1233 times
Tweet
Published in Blog
More in this category: « Let's set the record straight: There's nothing wrong with surrogacy! Ukrainian Surrogacy is a great option for couples struggling with infertility. Infertility Atitudes and Funding in the Jewish Community: An Opportunity for Ukrainian Surrogacy »
back to top
Learn more
Book meeting