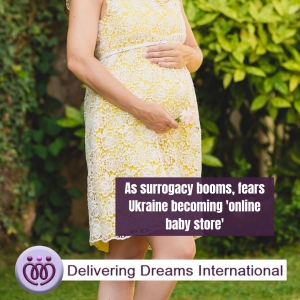 Tears of joy stream down Andrea Viez's face as she lifts her baby boy, born to a surrogate mother in Ukraine.

"He's a star," the Argentinian in her late 40s says, her voice trembling.

After nine years of trying to have a child, Viez can finally hold her son in her arms, thanks to a booming surrogacy industry in Ukraine that has given hope to thousands of struggling would-be parents.

But behind their dream-come-true is a highly profitable and murky business that many worry is taking advantage of desperate young women and operating in a grey zone open to abuse.

"Ukraine is becoming an international online baby store," the country's commissioner for children's rights Mykola Kuleba warned last month, condemning the "exploitation" of Ukrainian women and calling for a ban on the industry.

The fact that Ukraine is one of the few countries allowing commercial surrogacy for foreigners was oddly thrown into the spotlight by the coronavirus.

When travel restrictions imposed to fight the pandemic prevented dozens of parents from picking up their children born to surrogates, a local surrogacy company posted a video online showing the infants lying in rows of plastic cots in a hotel on the edge of Kiev.

The BioTexCom clinic hoped to draw attention to the stranded babies' plight. It worked and the government stepped in to help parents like Viez obtain special permits and pick up their children a few weeks later.

Though it has existed since the early 2000s, the industry exploded in Ukraine after India and Thailand outlawed commercial surrogacy for foreigners about five years ago.

One the poorest countries in Europe, the post-Soviet nation is also known for its attractive prices, with birth through a surrogate costing about $42,000. In the United States it can cost more than twice as much.

There are no official statistics, but experts say between 2,500 and 3,000 children are born every year through surrogacy in Ukraine for foreign parents. About a third of customers are Chinese.

The industry is poorly regulated and rife with abuse and corruption, says Sergiy Antonov, who runs a law firm specialising in reproductive issues.

Women are sometimes not paid promised amounts or are housed in terrible conditions during the later stages of their pregnancies. In some cases parents have discovered they have no genetic link with children born to surrogates.

Authorities suspect some clinics are also using surrogacy as a cover for illegal commercial adoptions.

They are most often hired through intermediaries who keep part of the surrogacy fee.

Korsunova is paid $400 a month during a pregnancy and receives $15,000 after delivery.

"I would not call this exploitation, nobody forces us," she says in the modest flat she rents in Kiev with her eight-year-old son.

Korsunova dreams of becoming a doctor but started working as a surrogate after she and her son fled war-torn eastern Ukraine in 2014.

She does admit that because of their drastic financial situation Ukrainian women "trade part of your health... for money."

Another surrogate, 26-year-old Olga, says she is happy to be able to help people have children.

"These children will be loved by their parents for the rest of their lives," says Olga, who is expecting twins for a Chinese couple.

She normally earns about $135 a month as a waitress and this is her second surrogacy. She hopes to open a cafe with her payment of $15,000 after delivery.

"I'm proud to be able to provide babies to people who couldn't become parents in a different way," she says.

"But if I had a normal job, of course I wouldn't have done it."

Read 367 times
Tweet
Published in Blog
More in this category: « INFLUENCER ANNOUNCES 51-YEAR-OLD MOTHER IS CARRYING HER BABY: 'SURROGACY IS THE MOST SELFLESS GIFT' Ukraine Welcomes Foreigners Again For Ukrainian Surrogacy And Tourism! »
back to top
Learn more
Book meeting